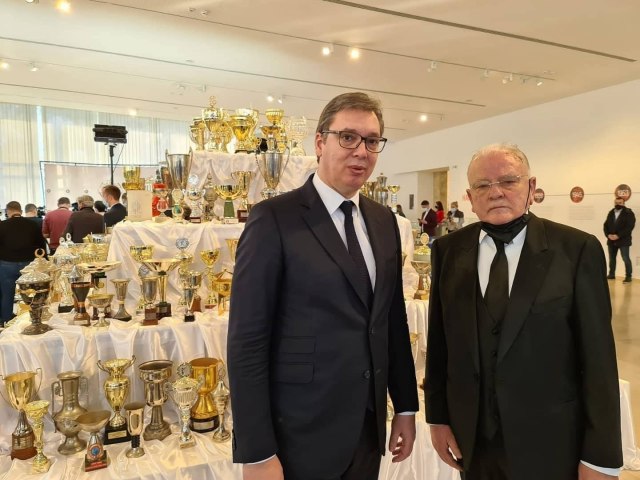 The ceremony is being held at the Museum of Yugoslavia on the occasion of marking the 100th anniversary of the founding of the Radnički Sports Association (6 Mihaila Mike Jankovića Street, in the Museum building on May 25).

Legendary basketball coach Dušan Duda Ivković and President of Serbia Aleksandar Vučić were awarded Golden Badges today on the occasion of marking the 100th anniversary of the Radnički Sports Association.

The President of Serbia stated that the sports association Radnički is one of our oldest, and probably the oldest, sports association, which managed to preserve its name, even when it was ordered otherwise, as well as its tradition and great people.

He also noticed at the ceremony on the occasion of the centenary of the founding of SD Radnički that Crvena zvezda and Partizan were always more popular and had more fans, but somehow everyone always loved Radnički. "Radnicki always had the sympathies of all people, but a smaller number of them were loyal to the idea that Radnicki should survive, not live from the past, but continue to progress and make great strides in the 21st century," Vucic said. He added that through the exhibition on the history of the club, which he had the opportunity to visit today, he learned a lot, saw and remembered what had fallen into oblivion.

"Our job is to help and do everything we can to build a magnificent hall," said Vucic, adding that the project documentation is being completed, as well as that a detailed regulation plan has been made, and the transfer of construction plots to the state is underway.

That is why he believes that in September or October, the cornerstone could be laid for a new hall, which would then be built in 18 to 24 months,

"In about two and a half years, the hall will be completed and you will be able to open fantastic sports facilities, everything that is necessary, and in the heart of Belgrade, which will be a huge incentive for all children," said Vucic, addressing Duda Ivkovic in particular. He reminded that many great players of domestic sports defended the colors of Radnicki, besides Duda Ivkovic, Boza Maljkovic, Slobodan Piva Ivkovic, and many others who left their signature in basketball and other sports, leaving a huge, indelible mark in the history of Serbian sports. "Thank you for the magnificent results and successes. Decorations are not easy to get, but medals are even harder, and you are the bearers of two medals, starting with Tito's," Vucic reminded and repeated once again that the state will help Radnicki as much as it can.

How important today's event is to him is also shown by the fact that, as he told the journalists, he does not want to answer political questions, and to spoil the moment, which is dedicated to Duda Ivković and the club that is marking a significant jubilee celebration.

The two of them played a game of chess before the award ceremony.

"A game of chess with the legendary Duda Ivković," the president wrote on his Instagram account, and posted a photo from the chess game.