BELGRADE -- President of Serbia, Aleksandar Vučić, said that it was certainly not easy for his son all these years.

BELGRADE -- President of Serbia, Aleksandar Vučić, said that it was certainly not easy for his son all these years. 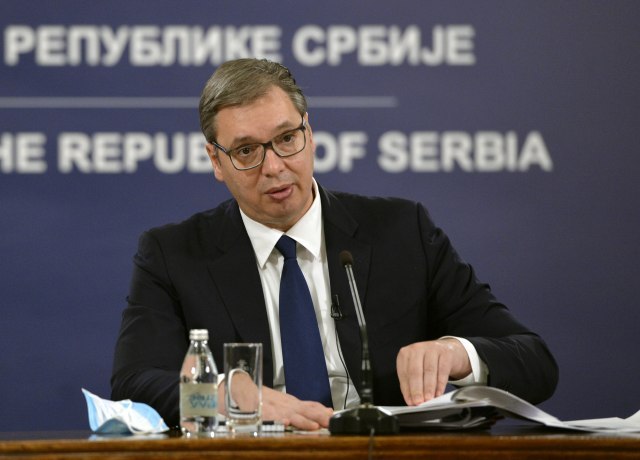 "It was not easy for him in all these years in which he became a terrible target for those who would like my head, and then take their anger out on children," said Vučić.

"I am more satisfied and happier that he managed to understand that," Vucic said for TV Pink.

"Before each new year, you set yourself three goals and work on achieving them. If you achieve one, it is a success. It is better than not setting any and not achieving any."

"We have managed to preserve peace and stability"

Vučić emphasized that Serbia managed to preserve peace and stability despite many challenges.

He said that in spite of everything, even the attack on the Assembly, peace was preserved and, as he says, this is the main precondition for providing further investments.

"We have maintained peace and stability all this time. There have been many challenges, such as the issue of Kosovo," Vucic said.

Vučić said that last night, according to our time, Sinofarm's vaccine against coronavirus was registered.

He pointed out that he hopes that there will be four vaccines in Serbia in January. "We have to combat coronavirus. We lost a lot of people, that's a big price we paid," he said. As he pointed out, thanks to the struggle of doctors, we still managed to fight better than some other countries. "We did our best, and thanks to the work of the state and doctors in the COVID system, Serbia is one of the most successful countries in this fight," Vucic said.

Vučić pointed out that Serbia is working on testing many people in order to discover as many cases as possible and people to receive health care.

"We have fought and since the outbreak of the coronavirus, we have provided everything that health workers need, all the equipment, as well as a dramatic increase in income. No country in Europe has done that for medics. We have paid off debts. We do not owe anything anymore", Vucic said.

Commenting on the fact that some said that Patriarch Irinej passed away earlier, Vučić pointed out that he actually passed away just when it was said and that he received the information at the same time, and added that he had a hard time receiving the news.

"It's unbelievable. You can't answer such lies anymore. There are no words to describe it. Dozens of people took care of him and have to write down the moment of death. And those who have no argument other than to hate, use everything to that purpose", Vucic said. He asked how many hospitals they had built, how many children were being treated abroad at the time, as well as whether they were doing anything other than changing the linoleum in the elevators.

He also referred to the fight against crime.

"We had the highest crime rate in their time, while today the murder rate is twice lower. We entered the confrontation of both Montenegrin clans. We discovered Usce, Belleville and we will, we will arrest them all," Vucic said. When it comes to demolition on the street, Vučić says that nothing will happen by force in Serbia.

"As for the insults directed at him, Vučić said that they were all notorious lies, but also that he had nothing against the citizens of Serbia making their own assessment. As he says, everyone always has a chance to win the elections, but also that they will not come to power by force.

"People will always get the right to choose who they want"

"You will not watch that film. People will always get the right to choose who they want, but in elections. The people understand and know that we must be a democratic country and that they must have the right and opportunity to express themselves freely," the president said, adding that they can clearly see who is really fighting for them.

The President wished a speedy recovery and good health to Boris Tadic.

"Who is the only target of Pristina and the media in Podgorica? The only opponent is me, they don't even mention anyone else. They praise their regime and thank them for the verdict ruled by the International Court of Justice", Vucic said.

He wondered if some thought they could deceive Serbs in Kosovo.

"Why do they vote for me and not for them, if I am a traitor and they are great patriots. We have shown them that we care about them, about their lives," said Vucic. He also said that it is Serbia's job to help Croatia, but also everyone else, adding that it is our human obligation. Commenting on the fact that it is often the topic of Croatian portals, he said that those who want to come to power at any cost will not choose where to start the attacks, and that they will invest a lot of money in it. "There are people who want to erase the Serbian trait in Belgrade. Explain to me why we haven't made a single feature film about Jasenovac here since 1945, until 'Dara from Jasenovac'", Vucic said. As he says, it is a matter of the fact that our children, who know nothing about Jasenovac, will finally be able to learn something about it. When it comes to Stefan Nemanja, he was the most important and greatest in founding the medieval Serbian state and creating Serbian statehood. As he says, Belgrade must treasure the truth about what happened in the Second World War, about the fact that we are the people that suffered most in the wars.

"Everything was done according to the law, including the bidding commission, in order to choose the best solution," Vucic said, adding that the monument is magnificent.