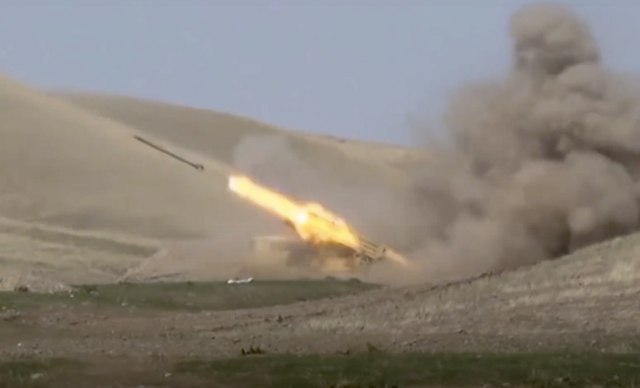 It should be reminded that Russia has a defense alliance with Armenia, and Turkey supports its ethnic community in Azerbaijan, Reuters writes. In the Nagorno-Karabakh region, which is located in Azerbaijan, the majority of the population are actually Armenians.

Intense armed clashes between Azerbaijani and Armenian forces continued during the night in the mountainous area of Nagorno Karabakh.

For now, no one can say with certainty who was the first to start the last conflict between the two countries over the disputed region, because the conflict has actually been silent on that ground for several decades. Also, no one will publicly say that behind everything is the "war" of two leaders, the Turkish and the Russian.

But it is slowly becoming apparent that if the conflict escalates, it will put Turkey and Russia in a very serious position, and thus the rest of the world.

Azerbaijan claims that it was attacked and in the talks of the president of that country with world leaders, it is emphasized that their attacks with heavy artillery are actually a counter-offensive, i.e. that Yerevan is the one that started the latest war and that Armenia must ask itself how all this will end now.

On the other hand, Armenian Prime Minister Nikol Pashinyan claims that Turkey is behind everything. According to the agencies, he had telephone conversations with UN Secretary General Antonio Guterres, as well as with German Chancellor Angela Merkel.

The conversation with Guterres was allegedly initiated by the first man of the UN, at least that is what the Armenian government claims. "Nikol Pashinyan underlined that, unlike the escalation of previous years, the current one is characterized by a very active and biased position of Turkey and its direct destabilizing presence in the actions of Azerbaijan," the statement reads.

A spokesman for the UN Secretary General, Stephane Dujarric, stated that the organization cannot independently verify the truth of this claim that Turkey is interfering in the conflict around Nagorno-Karabakh, and called for approval of access to the OSCE monitoring mission to the conflict zone.

However, Pashinyan also talked with German Chancellor Angela Merkel, whom he called for "curbing Turkey's aggressive policy" in the region.

Turkey immediately sided with Azerbaijan, supported by Erdogan's announcement on social media that Turkey, as always, supports the Azerbaijani brothers and sisters with all available means. Erdogan accused Armenia of putting the region in danger. He also said that the time had finally come to liberate Azerbaijan from occupation.

On the other hand, Putin is on the side of Armenia. Putin talked with the leader of Armenia, and as the agencies reported, the position of the Russian president is that the conflicts must end. However, Russia's position is that Armenia must defend itself.

Baku announced on September 27th that Armenia shelled the positions of the Azerbaijani army, and Yerevan claimed that the Azerbaijani armed forces launched an offensive towards Nagorno-Karabakh, shelling regional settlements, including the capital Stepanakert. Both sides reported casualties, including civilian casualties. Both Armenia and Azerbaijan have declared a state of emergency and mobilized troops.