BELGRADE -- The most important message is to show there are no protected people in Serbia, President Aleksandar Vucic said, commenting on the allegations of Igor Juric

BELGRADE -- The most important message is to show there are no protected people in Serbia, President Aleksandar Vucic said, commenting on the allegations of Igor Juric 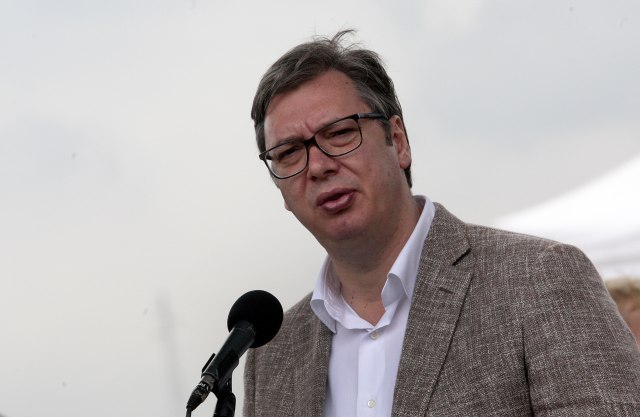 "I call on the competent state bodies to do their job and the prosecutor's office to tell us whether that politician exists or not," Vucic said about Juric's allegation that there is a pedophile politician in Serbia.

The most important message is to show that there are no protected people in Serbia, and the state authorities will, according to him, do everything to determine that.

"If there is, we will show that there are no protected people in Serbia and that, regardless of whether you are a politician, you have money, physical strength, you cannot be arrogant and abuse minor children. That is far from my understanding and people should be convinced that the state will do everything to get to the truth”, he says.

He emphasizes that he does not want to criticize anyone, not even Juric, but that he should be asked if he knows anything about this case or not.

"I think that it is of crucial importance to protect the child and to show that there are no protected people, and people in Serbia are not interested in political tricks at all", Vucic said.

"I tried, I will try to speak tonight only as president, and not as a member of the party I lead. It is horrible for me to see that someone who participates in political life was attacked. The state reacted quickly, the attackers were detained," the president said.

"Trifunovic is not a person with whom we would build political alliances," the president added, explaining that this does not mean that someone has the right to physically threaten him. "We have to do something, so I stopped saying any names two months ago. That is a good introduction, and I am convinced that Mr. Trifunovic's party, as well as many others, will be in parliament, and will have the opportunity to express their views there”, he says.

"We have to admit that we were defeated in 1999, but I'm not talking about the negligence of those who attacked us," he says, adding that the verdict of the International Court of Justice was passed in 2010, which shows that we are in a difficult situation.

"We managed to keep Serbia respectable, to fulfill its international obligations," he says, adding that we have managed to take care of our national interests at the moment.

"If you ask me whether I am very optimistic that a compromise solution will be found - I am not," he added.

"There is no doubt that without resolving the Kosovo problem, Serbia will not become EU member," he says, adding that this is an unequivocal message from the EU. "It is obvious that there is a big conflict between the two Western powers over the situation in Pristina. We will see what will happen around their government. We are ready to talk," Vucic said.

He, by the way, pointed out on several occasions that Germany came out of the epidemic with new strength.

He also says that he does not see how and in what way and what we can agree on, but that we have to talk, to solve countless problems between Serbs and Albanians - we have to.

"But when I ask what the solution is, I only hear that there are no border changes. They are waiting for someone in Serbia to say that it is not Serbia, or "we will give up everything so that someone can pat us on the shoulder", Vucic told "Hit Tweet".

The President of Serbia spoke about the pre-election video and the negative comments it caused on social networks.

"You have had that since Zoran Djindjic," Vucic said, explaining the participation of children in pre-election videos.