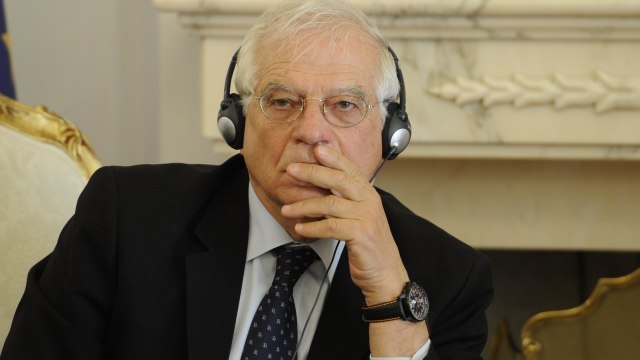 He said before visiting Serbia that he would be the main interlocutor for the authorities in Belgrade and Pristina.

"I will be personally engaged in dialogue and will not regret the effort", Borrell said in an interview with Tanjug before visiting Serbia.

He stresses that, upon his arrival to Serbia, he wants primarily to demonstrate the Union's clear commitment to the European perspective of our country and the entire Western Balkans.

In an interview with Tanjug, Borrell stressed that the EU and Serbia, as well as the region, have a common future and a very clear interest in strengthening co-operation in security, the economy and foreign policy.

“For me personally and for the European Commission, the EU perspective of Serbia and the Western Balkans is a priority. For its part, Serbia needs to keep its course on EU reforms, which would allow it to move faster in the accession negotiations", Borrell says.

Josep Borrell recalls that the EU has made it clear that the "key" to Serbia's accession to membership is the normalization of relations with Pristina through a comprehensive legally binding agreement and internal reforms with a focus on the rule of law and the media.

He also added that the EU would particularly like to strengthen co-operation with Serbia in the area of foreign and security policy.

"We very much appreciate the contribution Serbia makes through its participation in EU military missions and operations, but there is room in which Serbia could make an additional effort to align its foreign policy with that of the EU. Our shared challenges require common answers”, Borrell said.

"I am personally committed to mediating the Belgrade-Pristina dialogue and I expect it to continue as quickly as possible. It is crucial for the Kosovo authorities to seize this new moment and set aside customs tariffs. Serbia also has to make its contribution in order to arrive at a constructive atmosphere for the resumption of negotiations", Borrell said.

The EU High Representative says he is convinced that Serbian President Aleksandar Vucic and the Serbian government understand the current situation.

“For me, the main priority is to make it clear to everyone why we are sitting at the same table, what we want to achieve and we want to make progress. Relationship normalization is a delicate matter, which touches the very heart of people's identities. I am aware that the past is still present, but we must move on”, Borrell concluded.

"I want to help establish the right conditions and rebuild confidence so that when we sit at the table, we have a chance of success. The first thing I want to hear is from both sides whether there is political will, commitment and engagement”, the EU foreign minister explains.

He notes that he is aware of the fact that the situation in the Belgrade-Pristina dialogue is complex, but also believes that the solution is long overdue.
And when a solution is reached, according to Borrell, it depends primarily on the two parties to the dialogue.

Asked by Tanjug whether he is considering appointing an EU Special Representative for the Western Balkans, who should also participate as an intermediary in the dialogue between Belgrade and Pristina, Borrell remains clear:

“I will be personally engaged in the dialogue and will not regret the effort. I will be the main interlocutor for the authorities in Belgrade and Pristina, and the most important thing is to continue the dialogue", Borrell concluded in an interview with Tanjug.