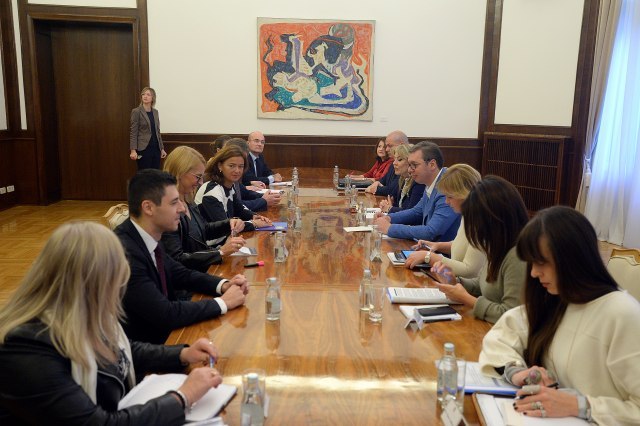 Serbian President made this statement on the meeting with the representatives of Parliamentary Committee for Stabilization and Association of Serbia and the European Union (POSP).

Vucic congratulated Tanja Fajon on her election as Chair of the European Parliament Delegation to the European Union-Serbia Stabilization and Association Parliamentary Committee. He praised the agreement of the leaders of the member states on the holders of the most important posts in the EU, expressing hope that the newly constituted EU institutions will continue to support the expansion policy and Serbia’s European path.

He underlined that Serbia welcomes the appointment of Vladimir Bilcik MEP as European Parliament Rapporteur for Serbia, and thanked his predecessor David McAllister for actively contributing to Serbia’s European integration.

"Serbia is advocating peace and stability in the region, while regional co-operation, strengthening neighborly relations, continuing reconciliation policy are our foreign policy priorities", Vucic pointed out, adding that Serbia regards Berlin Process as very significant, the importance of which is reflected in supporting European integration of the Western Balkans through concrete projects and measures.

Chair of the Parliamentary Committee for Stabilization and Association of Serbia and the European Union, Tanja Fajon, stated that European Parliament is advocating EU enlargement, Serbia being among the most serious candidates for EU accession. She congratulated Serbia on the successes in the economic field, and thanked the European Parliament for the opportunity to mediate the dialogue between the authorities and the opposition. Fajon expressed concern over the state of media freedom in Serbia, in the same time praising Serbian authorities for drafting a national media strategy.

“The European Parliament will continue to support the EU expansion policy and advocates Serbia’s approach as the best way to achieve progress in European integration,” Fajon said, concluding that she expects that European Parliament will change its decision regarding North Macedonia and Albania, sending positive message to those countries prior to EU Summit on the Western Balkans to take place in Zagreb.