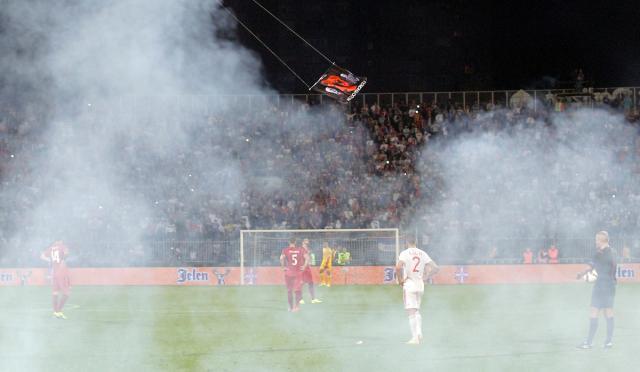 Ismail's lawyer Darko Butigan confirmed for BIRN on Monday that his client has applied for political asylum in Croatia in a bid to avoid extradition to Serbia, where he thinks he will not have a fair trial.

Butigan told Albania's Top Channel that Serbia has charged his client with "inciting criminal offenses among nations" and that he could face up to eight years in prison if put on trial and found guilty.

Morina is suspected of operating the drone during the football match, played between Serbia and Albania on October 14, 2014. This was followed by incidents, a pitch invasion, and the suspension of the game, with victory later handed to Albania by the Court of Arbitration for Sport .

Morina was arrested in June in Croatia on Serbia's request, and a court in Dubrovnik decided last Thursday to extradite him to Serbia. Butigan appealed against the decision to the Supreme Court of Croatia, which has no deadline to decide.

Once made, the decision must be confirmed by the country's justice minister.

On Saturday, the Albanian Football Association called on the Albanian government to "legally intervene" and prevent Morina's extradition to Serbia.

On Friday, the Albanian justice minister urged his Croatian counterpart to suspend the request for extradition "because it is not in line with European conventions on extradition and human rights."

BIRN recalled in its report that Morina "angered Serbian nationalist with the Greater Albania flag, while Albanian nationalists for the same reason admire him and consider him a hero."

Morina was in trouble with the law on another occasion: he was arrested in October 2015 while in possession of weapons, and 36 tickets for the Albania vs. Serbia match in Elbasan, Albania. He was released in December.