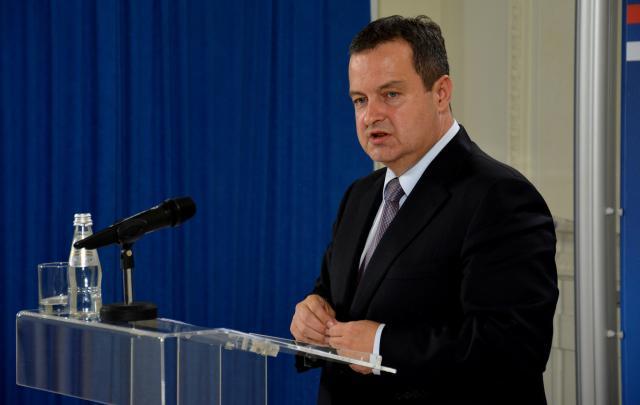 He added that there is no hope for a political agreement in Macedonia, that there is political instability in Croatia, and that it is "of vital importance to determine whether there is an authority that keeps things under control."

"The international community did not intervene with a demand to come to a compromise, but to accept an option. It is obvious that there are great disagreements within Macedonian society regardless of whether it's about Macedonians or Albanians," said Dacic.

He said that PM and President-elect Aleksandar Vucic "had several conversations yesterday" and that "Serbia will help as much as it can - but we can only appeal to peace."

According to Dacic, if Serbia had "some other government" - today the situation in our country would be like that in Macedonia.

Serbia, he added, is reacting to provocations coming from southern municipalities where Albanians live "with restraint."

These provocations include statements about Albania's prime minister, rather than Vucic being their "president," and about "a Greater Albania" not being complete without the Serbian city of Nis.

Dacic admitted it was "not easy to hold back faced with the daily statements about the creation of a Greater Albania," but that he "respects the red line drawn by Vucic."

"It's just like if we talked about uniting the Serbs from the region. The first to respond to their statement was Johannes Hahn," said Dacic.

According to him, the Greater Albania rhetoric is not happening by accident - "Albanians are not so brave to speak about it by themselves."

"That is why it's important to preserve political stability. Would we want scenes like in Macedonia to happen here?," Dacic asked.

Speaking about the decision of a French court not to extradite Ramush Haradinaj to Serbia, Dacic said it was "political and had nothing to do with the law."

"You heard Haradinaj's message, that one should do as Croats did. What does that mean? Killing Serbs during the 1990s was not enough for him, he wants to continue all that," said Dacic.

He stressed that Serbia "responds to all that with restraint" but that "no one should play with the people of Serbia and the Serbian state."

"We are a small but proud country. We act with restraint because we are aware that the situation should not be additionally heated and that the way out is in agreement, not in escalation and war," said the minister.

According to him, Albanians have taken an "all or nothing" position - "but those who were their protectors have disappeared from the global political scene."

"They still think that some new merciful angel will protect them," Dacic concluded.