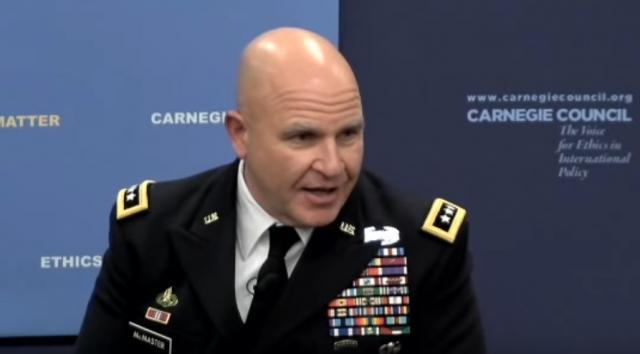 In a 2003 paper, HR McMaster, among other things, writes about the war in Bosnia-Herzegovina, to state:

"In July 1995, the horror of Srebrenica, including the humiliating surrender of Dutch peacekeepers to the Bosnian Serb war criminal Ratko Mladic, and the subsequent murder of seven thousand Muslim men, finally overcame American and European reticence to use force against the Bosnian Serbs."

"To many, Mladic’s Serbs had seemed a formidable opponent; estimates of the number of ground troops needed to intervene in Bosnia were high. Bosnian Serb brutality against defenseless civilians, however, masked weakness. In early August, Croat and Muslim forces that America trained and equipped attacked and began to rout the Bosnian Serbs," stated McMaster.

He also mentioned a tragedy in Sarajevo, at the Markale market.

"In response to a brutal and senseless mortar attack on the Sarajevo marketplace that killed thirty-eight people and wounded eighty-five others, NATO air power struck Serbian forces in Bosnia hard. During the first twenty-four hours of Operation Deliberate Force, 300 strike sorties attacked Serb forces. It was a sharp contrast with the previous two years of irresolute and ineffective air strikes that NATO carried out in Bosnia under Operation Deny Flight."

McMaster also wrote about NATO's 1999 bombing of Yugoslavia, then consisting of Serbia and Montenegro:

"Macedonia provided a base of operations, but the situation there was unstable; the majority of its populace was sympathetic to the Serbs and feared an uprising by their own ethnic Albanian population. Protests in Greece, a NATO member, threatened to shut down critical supply lines. The French and Italians were unenthusiastic about an intensive air campaign against Serbia and favored measured attacks to communicate resolve. Despite working on war plans from May of 1998 to March of 1999, differences among NATO members kept those plans in flux. (...) The assumption that the war in Kosovo would lie in the realm of certainty undermined NATO’s ability to meet objectives and prevent suffering. Near-certainty combined with long range precision fires was supposed to vitiate the need for ground forces and a make possible a fast, low-cost, low-casualty war. The campaign was supposed to last five days; it lasted eleven weeks and ended after 40,000 aircraft sorties and the threat of a ground invasion."

According to him, then Yugoslav president, Slobodan Milosevic, "anticipated NATO's actions and countered them":

"He moved troops to the border of Kosovo weeks prior to the initiation of air and missile attacks. When the campaign started, those forces threw the Albanian population into the street, stripped them of their identification, looted their possessions, burned their houses, and drove them like cattle toward the Macedonian and Albanian borders. NATO was surprised and unprepared. The air campaign had the unintended consequence of actually accelerating the brutal ethnic cleansing operations it was intended to stop."

According to McMaster, NATO hit many targets "unintentionally," while Belgrade "had access to plans through spies at NATO headquarters":

"The Serbs’ ability to obtain considerable intelligence on allied operations despite their technological inferiority draws into question the denial component of 'information superiority' against even a foe that has very basic capabilities. The Serbs evacuated certain targets soon after they appeared on target lists. It is likely that the Yugoslav government had access to plans through spies at NATO headquarters. Additionally, spies stationed outside Aviano Airbase provided early warning when aircraft departed on missions."

"NATO greatly exaggerated losses inflicted on the Serbian military. Initial reports estimated that the bombing destroyed over 450 artillery pieces, 120 tanks and self-propelled artillery and 220 armored personnel carriers. Nothing close to those numbers, however, were counted physically. The Allied Force Munitions Effectiveness Assessment Team later reported the following numbers of destroyed equipment: 14 tanks, 18 armored personnel carriers, and 20 artillery pieces. Those numbers suggested that less than five percent of the Serbian combat systems had been destroyed during the seventy-eight day campaign. NATO’s effort to attack enemy ground units failed. The extent of that failure became apparent only after the air war was over," wrote McMaster.