New Caledonia set to break away from France in second independence referendum? PHOTO

Citizens of New Caledonia, France's overseas territory, went in large numbers to a referendum to decide whether they were in favor of independence from France. 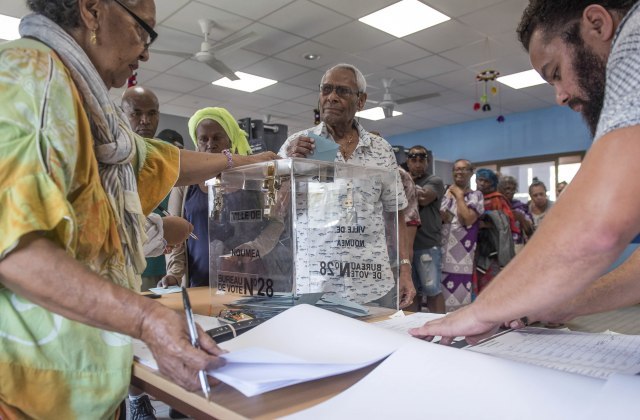 This would break the ties that were established in the middle of the 19th century.

Today's referendum should establish the effects of the three-decade decolonization of this South Pacific archipelago and calm the tensions that exist between the members of the indigenous Melanesian people of Kanak, inhabitants of New Caledonia, who seek independence from France, and those who oppose it.

The referendum poses a question: "Do you want New Caledonia to gain full sovereignty and become independent?"

"Today is not like any other day. Everyone has been on their feet since early morning because they want to vote," a New Caledonian citizen told the AP.

If the supporters of independence win, the period of transition would begin immediately, otherwise New Caledonia would remain in the status of the overseas territory of the Republic of France until further notice.

New Caledonia is home to 270.000 people, including members of the indigenous Kanak people who have been subjected to severe police segregation and discrimination in the past.

New Caledonia was annexed to France in 1853 under Napoleon III and was a prison colony for several decades, but after the Second World War, it became an overseas territory and since then every inhabitant has been guaranteed French citizenship.

Non-independence narrowly prevailed in a referendum held today in New Caledonia, the French archipelago in the South Pacific, with 53 percent of the vote, showing partial results based on 70 percent of the votes counted, the High Commissioner said.

The number of those who voted for the independence of that territory increased in relation to a similar referendum held in 2018.

In the first referendum held on November 4, 2018, the "no" won with 56.7 percent, compared to 43.3 percent for independence. That gap seems to have narrowed in today's referendum on partial results.

Turnout in the referendum was 85.85 percent.

The future of the archipelago east of Australia and its 270.000 inhabitants was voted on today, including the natives of Kanaka, who once suffered from a strict policy of segregation, and the descendants of European colonizers.

The referendum question was: "Do you want New Caledonia to gain full sovereignty and become independent?", while more than 180.000 people had the right to vote.