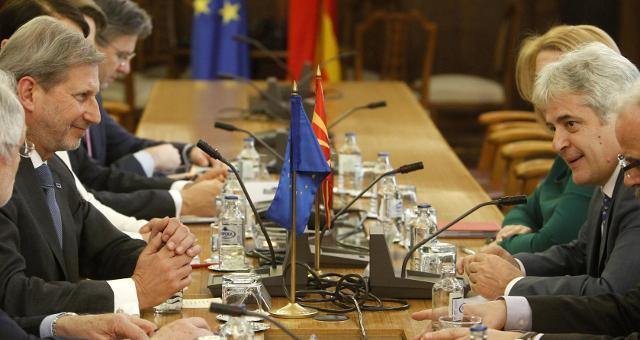 Beta is reporting that Hahn posted this on Twitter after his meeting in Skopje on Tuesday with leader of the ethnic Albanian Besa Movement Bilal Kasami.

"The EU path is open for Skopje after the last EU Council, but the clock is ticking. Need statesmanship instead of tactics. The economy is hurting," Hahn tweeted.

Hahn, and European Parliament members Eduard Kukan, Knut Fleckenstein, and Ivo Vajgl, who accompanied him on his trip, issued a joint statement "on the situation in the former Yugoslav Republic of Macedonia."

"We reiterated very clearly that all leaders of the country, including the president, must now respect the outcome of the recent elections. In a democracy, everyone must acknowledge parliamentary majorities. We therefore encourage the president to reconsider his position urgently. There is no time to lose," the statement said, adding:

"We now expect all political leaders and institutions to let the democratic process run its course - in the interest of the country's citizens. The delays of the past months are already damaging the country´s economy. We thus call on a swift formation of a new government committed to implement overdue reforms. The parties and the new government are expected to continue implementing all parts of their Przino agreement."

According to Beta, Macedonian President Gjorge Ivanov "refused to meet with Hahn" and said there was nothing new that he could say and that he had already told him before that he did not want to name Zoran Zaev the prime minister-designate, who had formed a parliamentary majority with Albanian parties.

Tanjug is reporting that Ivanov, who was in Hungary on Tuesday, did not meet with the EU official and explained it by saying he would not be able to return to Skopje in time.