President Vucic will address the citizens of Nis and southern Serbia at 11 a.m., and you can watch live broadcasts on TV B92 and TV Prva, as well as on B92.net. 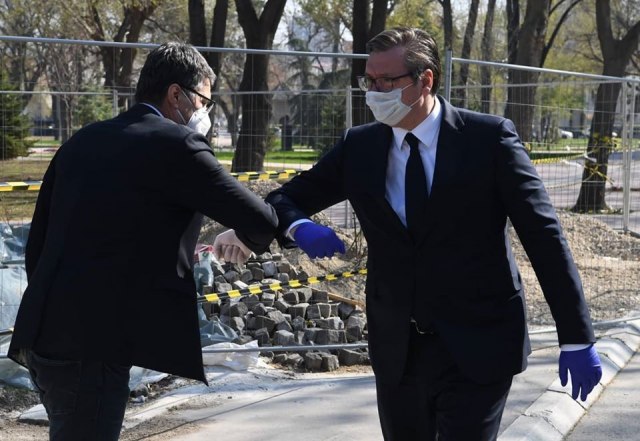 Serbian President Aleksandar Vucic delivered 9 clinical and 20 mobile respirators in Nis, as well as a large number of masks and other medical equipment.

According to the President, with the assistance delivered today, there is enough equipment "to cover" the entire southern Serbia."

"We do not do this only for Nis, but send equipment for Leskovac, Vranje, Pirot, Toplica immediately, that their hospitals have everything they need," Vucic said.

Epidemiologist Branislav Tiodorovic adds that the measures are much better complied with now than they were at the beginning, and that is evident from the results, but, as he states, it still takes steel discipline to "push through" the next week and then be "close" to achieving success.

During the delivery of the equipment, President Vucic said that the biggest problem was the accommodation of people, and that it was necessary to build a new Clinic Center as a COVID hospital.

9 clinical and 20 mobile respirators were delivered.

"The big problem is getting new respirators," the president says, adding for the Nis residents:
"The heroic people have always been living here."

Vucic also met with representatives of local self-government, the Clinical Center Nis and other health institutions.