Serbia-Germany relations "have never been better" 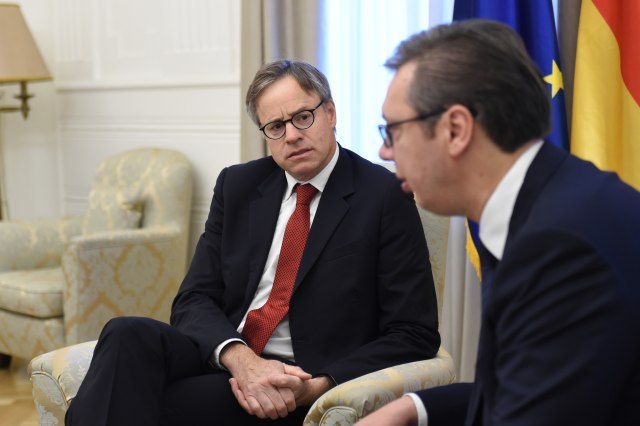 Vucic, who received Dittmann for a farewell visit, thanked him for good cooperation and contribution to the improvement of relations between Serbia and Germany with his dedicated work and diplomatic experience, said a press release from the president's office.

The two interlocutors "noted that Serbia and Germany have best relations in their history, which are characterized by great mutual trust, illustrated by numerous visits by top officials of the two countries, realized down during the diplomatic mandate of Ambassador Dittmann."

Vucic emphasized that economic cooperation has a strong momentum and that he believes the increase in the number of German investments reflects the changed image of Serbia and its greater reputation in Germany.

He thanked German companies for providing jobs for almost 50,000 workers in Serbia and expressed hope that their experience will contribute to an even greater interest in investing in our country.

Dittmann said that he was honored to represent Germany in Serbia and thanked for the support that Vucic and the government provided during his work in Belgrade.

He stressed that Germany strongly supports the European path of Serbia and the policy of regional stability, stressing the need to improve the rule of law within the framework of reforms for EU membership.

Vucic particularly emphasized the importance of the Berlin Process, initiated by Chancellor Angela Merkel, for peace and stability in the Western Balkans.

Vucic emphasized Serbia's determination that, "for the sake of a peaceful future of our country and the entire region, we are working to reach a compromise solution for Kosovo and Metohija, which would at the same time protect our state and national interests."

The President also wished Dittmann a lot of success in his new, responsible duty in the German Ministry of Foreign Affairs, the statement said.