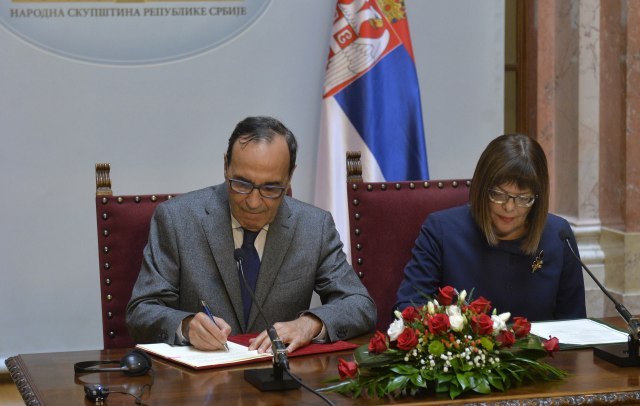 Maliki, who earlier in the day met with the Serbian president, spoke at the Serbian National Assembly after a meeting with its president, Maja Gojkovic.

"Knowing historical and geographic facts well, we cannot recognize self-proclaimed states because that poses a threat to other regions of the world," El Maliki told reporters.

He pointed out that all problems can be solved through dialogue, while respecting international legal norms.

Gojkovic thanked Morocco for supporting Serbia, respecting international law and UN Security Council Resolution 1244 concerning the territorial integrity and sovereignty of our state, as well as a peaceful resolution and dialogue between Serbia and the authorities in Pristina.

Gojkovic said that the recent ratification of an agreement between the two countries opens the possibility of establishing regular flights between Belgrade and a major Moroccan city by the end of the year, which, according to her, will enable better economic cooperation.

The Serbian National Assembly president also suggested that Novi Sad, as the European capital of culture in 2021, should establish cooperation with a Moroccan city, while El Maliki pointed out that he would immediately take this proposal into consideration.

Gojkovic stressed that this was the first visit at the parliamentary level in the 61-year history of bilateral relations between Serbia and Morocco.

Gojkovic and El Maliki today also singed a memorandum of understanding between the two parliaments.