We live in world of double standards, says Serbian president

"You see that nobody is reacting to Arifi's statement. We live in a world of double standards," Serbian President Aleksandar Vucic said on Friday. 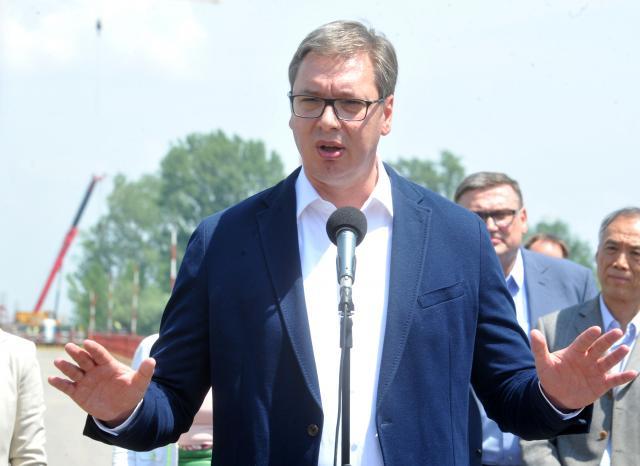 Vucic, who spoke while he was touring Corridor 11 works, was referring to a recent comment made by Pristina's chief negotiator in the Kosovo dialogue Avni Arifi.

According to Albanian language daily Koha Ditore, Arifi said that the issue of forming the Community of Serb Municipalities (ZSO) in Kosovo "should not be the only issue of such importance, because it is only one of ten other unimplemented topics".

Asked to comment on this statement, Vucic said, "We know that the Albanian side is not fulfilling anything in terms of its obligations under the Brussels agreement, but Serbia will not withdraw."

"You see that nobody has reacted to Arifi's statement, you must understand that we live in a world in double standards, and that's the way it will be. That's why it is our desire to fight for a better status and we succeeded, and that is why we received a letter from (Chinese President) Xi, we are being received in the West... Do not hope for much, it will be difficult," he said.

Asked "whether there was someone in the West who says that Serbia is not the problem, but that it is instead clear that Albanians do not want to form the ZSO" - Vucic replied, "They all know it, but nobody is particularly interested in this, especially those who have recognized Kosovo."

"David McCalister at the time told Albanian Prime Minister Edi Rama that, if Serbia had done to some Albanian what was done to Marko Djuric in Pristina, Vucic would be hanging in the middle of the UN. We live in double standards, something applies to us, something to them. That's how it has been and will be," Vucic said.

According to him, "our desire is to fight for a better status, and it is important that friends like Chinese President Xi Jinping send letters to us, I am received in Turkey, Russia, and in the West with more respect."

"Their interest is to push an independent Kosovo, and our to protect our people. Do not expect (things to be) much better, it will be difficult," concluded Vucic.