PM Vucic meets with US Senator McCain in Belgrade/PHOTOS

US Senator John McCain arrived in Belgrade on Monday where he met with with Serbian Prime Minister and Presidenti-elect Aleksandar Vucic. 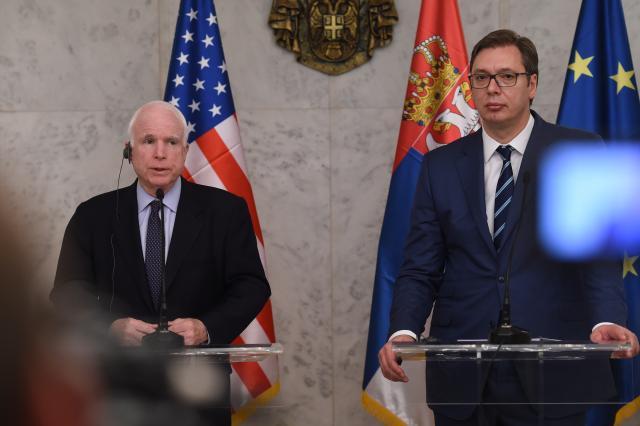 Addressing reporters during a joint news conference after the meeting held in the Villa Mir in Belgrade, Vucic said that he and the US official had "a successful working lunch," and added that their conversation "went in three directions":

"First, the issue of maintaining peace and stability in the region. Second, our bilateral relations. Third, Serbia's participation in global trends and our stances on important questions in the world."

"We spoke about us investing much time and strength into preserving peace, about our efforts to continue as soon as possible the (Kosovo) dialogue in Brussels, and about building relations with Montenegro, Macedonia, and Albania in the best possible way," he said.

Vucic added that he and McCain also spoke about "peace operations, Serbia's European road, mutual relations between the two countries, exercises and activities."

"We had eight joint exercises in 2016, six or seven are planned for 2017, and over one hundred joint activities. That's very fair cooperation," he said.

According to Vucic, he repeated during today's meeting that Serbia does not wish to join any military bloc.

"I thank McCain for the visit, he is one of the more important people in the US, and my thanks to him for showing concern for the Western Balkans. My thanks to him for not finding it difficult to hear somewhat different words in Serbia, than in other countries in the region," Vucic concluded, stating that the US senator was "always welcome in Serbia."

Vucic announced McCain's visit during a news conference on Sunday, when he said the conversation would focus on "the position of Serbia, and about Kosovo and Metohija," and also, Serbia's "stance toward Syria, that is, about Serbia's foreign policy orientation."

He stressed that bilateral cooperation would "certainly be spoken about - because McCain is an influential senator whose word has a lot of weight in the US."

Kosovo will be also be one of the topics, Vucic said, but added that "it is not easy to talk now, after such statements made by Daut Haradinaj and Hashim Thaci, and the calls on Albanians in Macedonia to take matters into their own hands."

Earlier, Daut Haradinaj said that if his brother Ramush Haradinaj was extradited to Serbia, "not a single Serb would remain in Kosovo."