Foreign Minister Ivica Dacic said that Serbia will never stop the dialogue with Pristina - but takes a stance against unilateral actions. 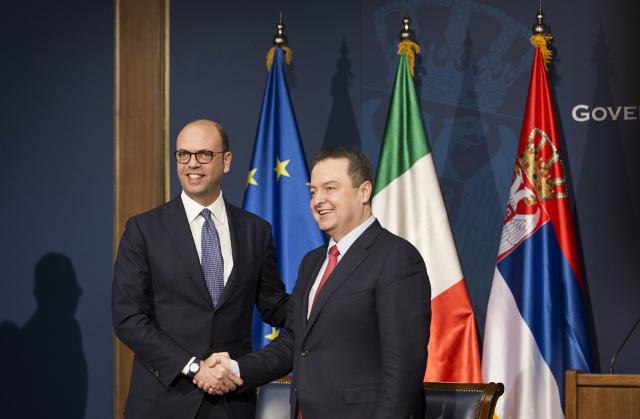 "Serbia has always been for dialogue. We will never interrupt the dialogue even when we we unhappy. We will not blackmail with our participation in the dialogue as Pristina is now doing, and will not provoke," Dacic said at a press conference after his meeting in Belgrade with Italian Foreign Minister Angelino Alfano.

Dacic said that Belgrade wants agreement and a lasting solution to the question of relations between Belgrade and Pristina, but opposes unilateral actions and cannot allow such actions to guide Serbia's positions.

Commenting on Pristina's efforts to become a member of UNESCO and other international organizations, Dacic said that "with time the conditions from an agreement on Kosovo's regional representation, including using a footnote referring to UN Security Council Resolution 1244, are being forgotten."

"We are not against Kosovo's participation in international organizations, but only if it is clearly defined that it can only be asymmetric, because for us the question of Kosovo's status is not resolved," said Dacic.

Serbia's relations with Italy are on the level of a strategic partnership that is on a constant upward trajectory, as is economic cooperation, Dacic also said during the news conference.

He announced the two countries' governments would hold a joint session in Serbia in September.

Alfano "underlined that Italy will continue to continue to support Serbia on its European path, because it is a place that naturally belongs to Serbia" and "praised the reforms and results achieved by Serbia in the European integration process."

Alfano invited Dacic to make a return visit to Italy.

Both sides agreed that the signing of this bilateral document "marked another important step forward in the field of cultural and educational cooperation between Italy and Serbia," the Ministry of Foreign Affairs said in a statement.

According to the Serbian government, Vucic and Alfano spoke about "relations between the two countries, the situation in the region and the continuation of dialogue with Pristina."

"We are trying to maintain the situation in Serbia stable so that the region could be stable too," Vucic said regarding the current situation in the neighboring countries.

He "expressed gratitude for Italy’s support to the European path of Serbia and added that he expects a lot from the meeting of leaders of the Western Balkans and the EU which will be held in Trieste."

The Berlin Process is a great hope for the region and we want to see more concrete results in programs of infrastructure, Vucic said.

"I want to express respect for our bilateral relations and the reform processes of your government. Yesterday I spoke with a large number of Italian investors who told me that they are very satisfied with the business environment in Serbia, and that is crucial for us," Alfano stated.

He "underlined that the fight against corruption, changes in the penalty code and the legal system are crucial points of the success of the Serbian government in the field of law," and that the economy and legal system are a good basis for strengthening relations of the two countries.

"Europe is the right place for Serbia and I want to give support to your aspirations to become part of the European family," Alfano concluded.