"This week I was visiting Belgrade, for a the two-day visit that has been prepared for a long time, in order to improve our strategic relations for peace, integration and economic and social development through their regional dimension, in the context of the historical Berlin process.

Albanians and Serbs, in this new century, together can do for each other and for the Balkans what the French and Germans did in the last century for themselves and for Europe, thanks to the extraordinary foresight a a gigantic determination, closing their eyes to the great rivers of blood that separated them for centuries.

With a firm belief in this winning idea, and so we continue to encourage it further, we are today conducting a new policy towards Serbia, the policy of dialogue, in which what separates us sharply, our diametrically opposed positions on Kosovo's independence, does not prevent us from communicating about what connects us, and this is our common path towards European integration and our mutual interests in terms of strengthening the economy.

Allow me to share with you my belief that the more openly Albania addresses Serbia, despite Kosovo, and vice versa, it also clearly before its people shows the will toward understanding and cooperation, in order to achieve the interests of ordinary people and the generations to come, on both sides of this wall inherited from the past that divides Albanians and Serbs, the harder will myths and ideologies of the past in that country continue among its citizens, who are hostile towards Albanians.

Because, as Albanians, Serbs today also, for their part, face major inherited problems, very similar to ours, in their daily economic, social and cultural life, we both are facing backwardness affecting the quality of our institutions and the functioning of public administration, we both are facing an acute need, but also a specific inability to achieve significant growth in foreign investment, which remains an unchanged condition for our economies to achieve rapid growth expected by our citizens. Separated, Albanians and Serbs have small markets, while our small market, here in Albania, that is, among Albanians, is itself divided into two parts, between Albania and Kosovo. Other markets in the region are also more or less such, small and divided.

Therefore there is a clear choice before us - either we remain separated from Serbs, with our backs turned to each other, even though we are two neighboring peoples and, indeed, to our good fortune, the two largest nations in the region, to both separately face considerable difficulties stemming from our small markets, or we we will be turned toward one another, face to face, starting from our interests, first and foremost the very important interests to realize the growth of our economy, by communicating with each other openly and without complexes, that is, in such a way as to face together the problems of our economic and social development.

Staying on the old road of hostility and mutual ignoring, in these times of peace, only produces greater competitiveness to false patriotisms among ourselves and does not contribute anything new to our economy and society, which to this day continues to pay the bills of the past, the greatest of all bills. The new road, one where we will be facing each other, threatens the careers and the business of those who have created a profession out of false patriotism and for whom a constant struggle for the symbols of the fatherland is a way of life, but it is the only path that can provide us with a secure European future in peace and prosperity for all our citizens.

Unfortunately, sometimes it seems as if we Albanians have forgotten that we were the ones who come out as winners from the armed conflicts with Serbia, and sometimes we act, at best, as if these conflicts have not even started, and at worst, as if we we who those who were defeated, not Serbia. It is indeed regrettable. As it is regrettable there are those among us today who do not understand that dialogue with Serbia is not only a new dimension to living in a completely new world for Kosovo, which rightly seeks its place in all international organizations and panels, but is the only way of preserving our economic interests, which without dialogue and willingness to compromise cannot translate into real development and welfare of our citizens.

Economic development and well-being must not be sacrificed today in an imaginary Balkan conflict that takes place through the rhetoric against yesterday's enemies, within the walls of our house, and which we use as a weapons for mutual calculations in the arena of the Albanian domestic politics.

We've already lost so many centuries, decades, and years, that we now cannot afford to lose a single day, playing war while remaining in stalemate. Because we have now come to the point, thanks to the extremely high engagement of our allies and partners, where we must not behave like children anymore, forgetting our important goals and tasks, turning against the whole world, and therefore against the future of our own children.

Because we now have two Albanian states, but are still only one nation that seeks and deserves to enjoy the fruits of Europe's future, and not to suffer the wounds of the Balkan past. And we, Albanians, will not be able to build our own future at all if we do not overcome and erase all the borders from the past. The boundaries of the past between us and Europe, between Albania and Kosovo, but also, and between Albanians and Serbs. In all these three directions simultaneously.

The future is in our hands, let us not tie our own hands with the chains from the past." 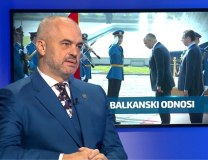 "As an EU candidate country, Serbia will have to overcome serious hurdles on its path to European Union membership with almost a million illegal firearms." 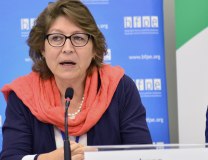 It's not just Britain that's angry and divided; so is Europe

Fury and dismay are bad councillors. Better to watch the moving jigsaw and wait for the right moment 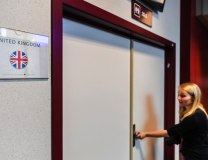