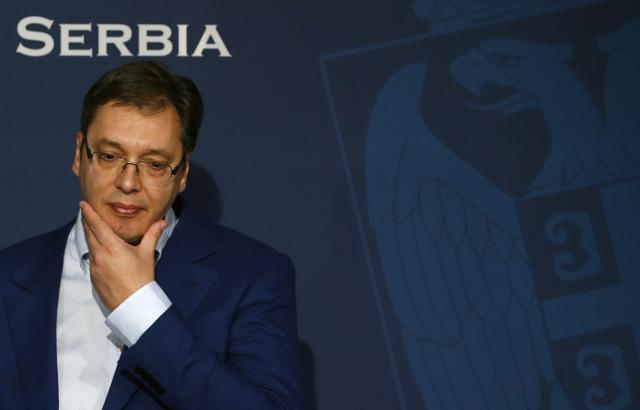 Vucic is seen during a news conference in Belgrade on Oct. 30 (Tanjug)

Speaking to reporters after a meeting with Hamburg Mayor Olaf Scholz, Vucic said he hoped Serbia and Germany would have stable relations in the future and that Serbia would attract even more German investors.

We will do everything we can to build the best relations with Hamburg and all cities in that region of Germany, as that city alone has a GDP that is many times higher than Serbia's, he said.

Vucic said he had noted Serbia's resolve to continue on the European path, strengthen the economy and continue to build a rule-of-law state.

We will also do that to attract more investors and businesspeople from Germany and ensure a secure economic environment, he said.

According to the announcements earlier in the day, Vucic will meet with Hamburg Mayor Olaf Scholz, representatives of major German companies interested in investing in Serbia and speak in the Ubersee business club, which gathers the most influential economic elite club in Germany.

The government said on its website that the club was founded in 1922 "as an association for the exchange of business and science at the initiative of the banker Max Warburg" and "from the very beginning, it was, above all, a meeting place of economy, politics and science, with the aim of international connectivity."

Ubersee club members "belong mainly to the banking-commercial-industrial elite of northern Germany. Nearly all the most important decision-makers of political and economic decisions in the world spoke before the club," the Serbian government said.