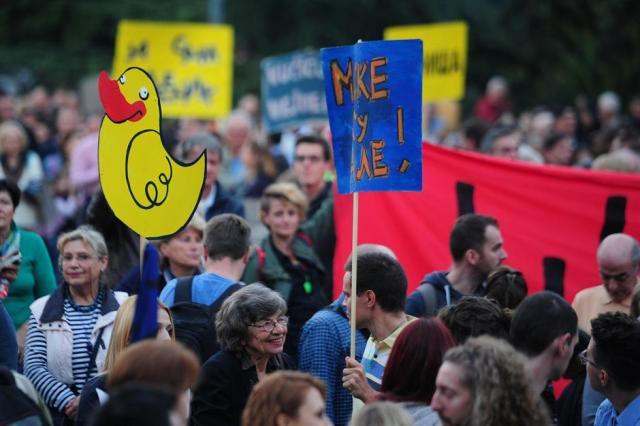 Under the slogan "No Fear, No Surrender," the participants of the sixth protest carried banners reading: "We will not let this pass," "The masks are off," "You look good in ski masks," "We will not allow this, for freedom," "We will not allows this," as well as a mock yellow duck which has become a symbol of the protest.

Initiative representative Radomir Lazovic said that the organizers of the protests had been subjected to various forms of pressure and media attacks during the past several months, primarily by the Informer and Srpski Telegraf newspapers and the Pink and Studio B television stations.

In a speech, Lazovic asked that the judicial and police authorities "not be accomplices and to do their job," adding that the case number of Savamala was unknown, as was the identity of the prosecutor handling the proceedings.

One of the leaders of the Support Radio Television Vojvodina movement, Sanja Kljajic, said that the protest "is not a battle just for Belgrade, but for all of Serbia."

The "Let's Not Drown Belgrade Initiative" is protesting the demolition of buildings, the tying and harassment of citizens in Savamala and the lack of a police reaction to calls for help by citizens in the night between April 24 and 25.

Although Prime Minister Aleksandar Vucic said that the city authorities were responsible for the demolition in Savamala, no one has been held to account.