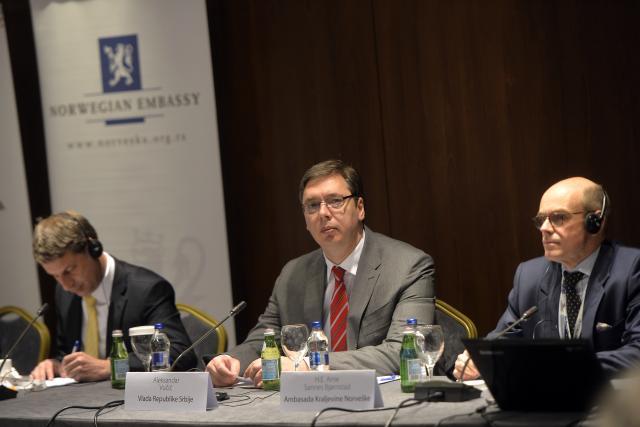 The crisis, Vucic said, "showed how all the other countries, which were not part of the EU, treated refugees, how the rule of law works and how principles are respected."

Serbia will do everything it can to be part of a comprehensive solution - if there is one, he said.

"If no common European solution is found, we will behave humanely and respect the principles of solidarity," said Vucic.

Vucic pointed out that 651,000 migrants had entered Serbia the year before, and 100,000 more since the beginning of the current year, and they were all registered and provided accommodation, healthcare services and protection.

The prime minister said that the refugee crisis was not "a big issue" in Serbia for several reasons, "including because Serbia did not want to gain political points, neither at home nor abroad, like many other, primarily EU countries, did."

"Our relationship was natural, human, normal and rational, and I do not think that we need to be praised for it, countries that received refugees permanently should be," said Vucic.

He added that Serbia is "not a rich country and this was the key reason why migrants did not want to stay," but added that he "hoped that some of them will stay and that Serbia will become their fatherland."

Vucic then said that the refugee crisis has currently only been postponed, not solved, "because of all the problems in Pakistan, Afghanistan, Syria," and that in the future work should be done "on other mechanisms to create societies that will have more tolerance because only societies that are ready for inclusion can survive."

Vucic, who is also the leader of the ruling SNS, said that "if his party is in the government after the (April 24) election, the law on refugees will not be adopted without the consent of the civil society."

Wednesday's conference in Belgrade is organized by Group 484 in partnership with the Belgrade Center for Human Rights and the Belgrade Center for Security Policy, and of the embassy of Norway. It is attended by more than 100 representatives of state institutions in charge of migration and asylum, and international and domestic civil society organizations.