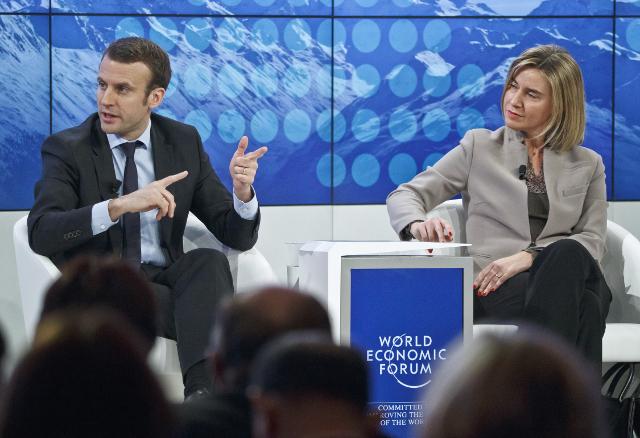 This was the message delivered at a BBC debate held at the World Economic Forum Annual Meeting.

The European project is facing division and disintegration, and Schengen (the border-free area that guarantees EU citizens free movement) is under attack. Europe’s leaders are deeply divided over how to handle the refugees fleeing war and persecution, particularly with the rise of xenophobic, populist parties.

Last December, Federica Mogherini, High Representative for Foreign Affairs and Security Policy; Vice-President of the European Commission, European Union, Brussels, said that the EU is at risk of “committing suicide”. Today, in Davos, she said that leaders and citizens realize that, without the European Union and its unity, “we could not face the problems of terrorism, migrants and refugees.”

Mogherini pointed out that, although it has taken eight months of summits to craft a coherent Europe-wide response to refugees, it is now up to the national governments to implement the response. “I do not see it as a failure that it took this long. This is a European issue; finally we are doing something … we need to implement the European solution,” she said.

Emmanuel Macron, Minister of the Economy, Industry and Digital Affairs of France, agreed. “We are at a critical point and we have just a few weeks to deliver concrete European solutions,” he said. Solutions include border controls with Turkey and deeper cooperation with countries such as Lebanon and Jordan, which have accepted hundreds of thousands of refugees. “If we enter into a non-European approach, it will kill the right European approach,” he said.

The hundreds of thousands of people fleeing the war in Ukraine into Poland is an unrecognized crisis, said Witold Waszczykowski, Minister of Foreign Affairs of Poland. Poland is hosting one million refugees. The minister said that it is important to focus on the conflict on Europe’s eastern borders. “We are alone in handling this crisis,” he said. In terms of refugees from the south, Europe was caught by surprise. “But, in 2015, Europe managed to organize itself and started dealing with Turkey.” The Polish minister reminded participants that the refugees arriving in Europe are now safe.

Europe’s choice is “disorganized chaotic arrivals or a more organized response”, including a stronger humanitarian response in Syria, said David Miliband, President of the International Rescue Committee, USA. “Relocation is part of the answer in Europe, but it isn’t the only answer.” According to Miliband, evidence shows that the greatest terrorist threat to the continent comes from people born in Europe. To those who believe most people arriving in Europe are not refugees, he noted that 59 percent are from Syria and 22 percent are from Afghanistan. Today’s challenge is integration, employment, education and citizenship. Evidence also shows that, the higher one builds the wall, the more one opens up routes for smugglers.

Germany’s Chancellor Angela Merkel took a strong, principled stand and opened German borders when refugees started arriving en masse. She is now under tremendous political pressure and her leadership is being questioned by some of her constituents. Josef Joffe, Publisher-Editor, Die Zeit, Germany, pointed out that “the great moral superpower of Sweden started closing its borders,” a trend that is cascading. “European values aside, the highly regulated welfare state stands in the way of absorbing vast numbers of people,” he said. “It is easy to talk about values; how do we do it?”

Over 2,500 leaders from business, government, international organizations, civil society, academia, media and the arts are participating in the 46th World Economic Forum Annual Meeting in Davos-Klosters, Switzerland, on 20-23 January.