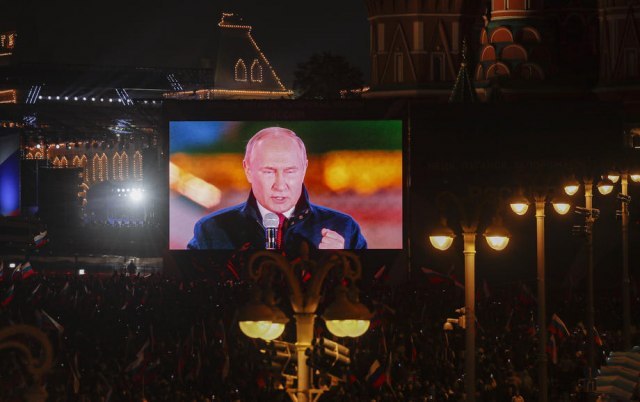 Addressing the crowd, Putin said that the day of signing the agreement on joining four new regions to Russia is historic.

"Today is a special, solemn and, without any exaggeration, historic day for us - the day of truth and justice," the head of state said.

As he pointed out, modern Russia gave the people living in the DNR, LNR, Kherson and Zaporizhzhia regions the right to choose - and they made the choice to be with Russia. For decades, they tried to eradicate the historical awareness of the people of Donbas, but they preserved their love for their homeland.

During the special operation, fighters heroically protect Donbas, we will do everything to support the new territories and their security, the Russian leader added. Russia has become stronger, strength is in the truth, Putin said.

"Russia not only opens the doors of our native home to our brothers and sisters, it opens its heart to them. Welcome home," Putin said. Those gathered at the celebration greeted this call with thunderous applause.

Putin ended his speech by saying, "Victory will be ours."

"Putin is not going"

Putin currently has no plans to visit the four Ukrainian regions that Moscow has annexed to its territory while the military conflict with Kyiv continues, a Kremlin spokesman said.

"Not yet, because there is a lot of work, but it will certainly happen after some time," Dmitry Peskov said when asked about the possibility of such a visit, according to Russian news agencies.