BELGRADE -- President of the Republic of Serbia, Aleksandar Vučić, addressed the public from Andrićev venac, where he spoke about all the most current topics.

BELGRADE -- President of the Republic of Serbia, Aleksandar Vučić, addressed the public from Andrićev venac, where he spoke about all the most current topics. 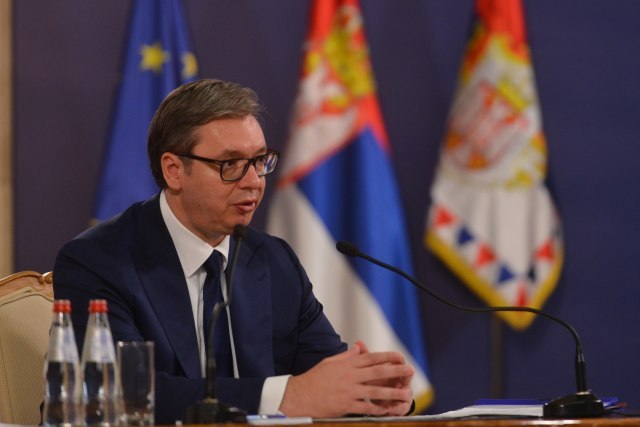 "As the war in Ukraine gained momentum, so the political and economic situation in the world is becoming more and more complicated, especially having in mind that Russia's forces are on the rise and that they are getting stronger. And all those who said that the war would be different, it is clear today that they are wrong, it brings different circumstances related to the economic situation in Europe and Serbia. That situation is more serious than the one we see," he said.

The President said that the situation was serious, and that in talks with the representatives of the EU and the countries of the region, they would find a solution for autumn and winter.

Vučić pointed out that more and more newly infected people are abroad, and asked the citizens to spend a part of their summer vacation in Serbia, and provided the citizens with vouchers. Also, the president announced that he would receive the fourth dose of the vaccine. Vučić also referred to the events from Brussels.

"It was not an easy position for me in Brussels. 16 presidents in Brussels said that we should align with the sanctions against Russia. Whoever thinks that it is easy to hear, listen - no. That is our job, but we should not go to the other extreme and think that we can find a replacement for EU markets or better partners and a better political path", he said.

After the speech, the president answered the questions of the journalists

Asked whether it was fair that Ukraine and Moldova were granted candidate status, President Vučić said that Serbia received a cluster from the EU in December, and that it was not fair to expect that we would now get a date on negotiations with the EU.

"For example, we have come a long way from North Macedonia and Albania. I hope that we can make progress in December and open a new cluster. Macron's initiative on the European political community should be considered accordingly. The idea is that as soon as we open clusters we can get more money, but also to participate in building the political system of that community", he pointed out.

He also said that he does not offer to solve problems that do not concern him and Serbia, and that it was important for us to be heard in Brussels, and that we have a lot to do. "And I have to say that in this critique and everything, they chose the words and the way they did it. Because I know how angry many of them are with us. Many EU countries are in a direct war against Russia. They are sending howitzers, planes, S "300 to Ukraine, and how do you think they will treat us. They are not in our shoes as we are not in theirs, and that is why our position is extremely difficult. Will it be easier? Well, it won't," he said.

"That is why the Open Balkans is so important, and that is why I supported our brothers and friends, who had high expectations, and those expectations were not met. First of all, I mean the Macedonians who were waiting for the approval of the Bulgarian parliament," the president said.

Vučić reiterated that certain EU countries are in a direct war against Russia, and that the Balkans were not a big topic at this year's summit.

"The great news was Ukraine. As a devil's advocate, I had one question that I will not repeat publicly. A question that is very difficult to answer when it comes to Moldova and Ukraine, especially Ukraine. We have been told for decades that they do not need a new Cyprus in Europe. And now you see that they can get three Cypriots, four Cypriots, which tells you that politics has always been dominant and crucial, Viktor Orban said that in economic terms, Serbia and Montenegro are much more ready to be part of the EU. But, who cares for that", he said.

He also spoke about the provocative statements of Albin Kurti, who reiterated that he was seeking mutual recognition, and that he would recognize Serbia.

"We have been told for decades, and we had a negotiating framework, and now Kurti is asking for that to be changed by force. Listen, he will recognize Serbia. If it wasn't funny, it would be sad, and this way a man must smile. We really need his recognition, no one in the world recognizes us", said Vučić.

About Veljko Belivuk: "They were arrested by the work of our services"

Also, the president commented on the criminal group of Veljko Belivuk and Belivuk himself.

"The entire Belivuk mafia was arrested by the work of our services, then we didn't have any open Sky phones. It required great courage for someone to crawl under the car, hook bugs... that's all we did. But we fully cooperate with foreign services. As for all the other wiretapping allegations, I believe in our institutions. I got my conversations tapped, I know they listened to me. Now it is up to the prosecution and the courts", he pointed out.

"We will have a worse world war"

He once again referred to the events in Ukraine.

"If peace is not established around Donbass when it is over - we will have a worse world war than it was," he emphasized.

Before addressing the public, the President received a delegation of representatives of the workers of the company Stelantis Kragujevac, which includes the Kragujevac factory Fiat.

Fiat workers will be offered to vote and choose one of three options: Those whom the employer decides to keep in the Stelantis plant will receive full pay from July 1, 2022. There are around 500 such workers, which includes protected categories.

Just to reiterate, Fiat workers held a protest two days ago and demanded that their requests be met, especially that those who do not want to work in Fiat's factories abroad can keep their jobs in Kragujevac, as well as that those who lose their jobs be given agreement on higher severance pay.