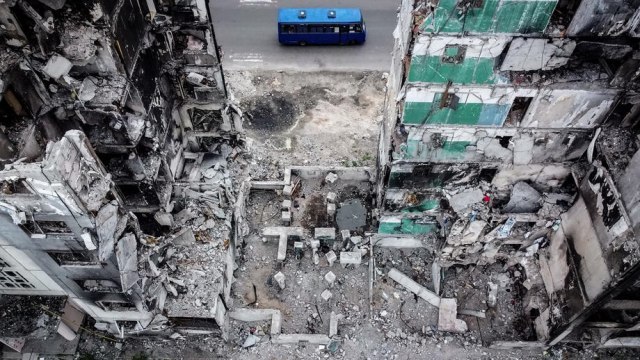 President Volodymyr Zelensky visited the front line in the Kharkiv region for the first time since the beginning of the war.

Leyen: I do not expect an agreement on sanctions in the next 48 hours

European Commission President Ursula von der Leyen says she does not expect an agreement on an embargo on oil imports from Russia to be reached in the next 48 hours, but says the situation is "maturing" and an agreement will be reached.

"Only one issue remains open, and that is the issue of crude oil that is imported through oil pipelines. This is still being discussed. There are no high expectations that we will solve everything in the next 48 hours, but the day after that," Leyen said.

Smoke in the sky above Kharkiv after reports of explosions

Lavrov: "The main loser in this whole story is Europe"

🔵Impressive Footage from the RT operator:
🟦the combat work of the #Russian division of the #Iskander OTRK during a special military operation in #Ukraine.#UkraineRussiaWar #Russia #RussiaUkraineWar pic.twitter.com/eG9zFfDbbd

Chechen fighters in Donbas have already heard about the creation of a new Azov unit in Kharkiv and, if given an order, are ready to "overthrow" it "with great appetite," said Chechen Minister of National and Foreign Policy, Press and Information Ahmed Dudayev for RIA Novosti.

"It was not a problem for our fighters to fight these devils and followers of Satanism in Mariupol, our fighters did it with great appetite," Dudayev said.

Appeal of 9 OSB fighters who did not leave their positions

The Armed Forces of Ukraine destroyed the Russian Mi-35MS helicopter