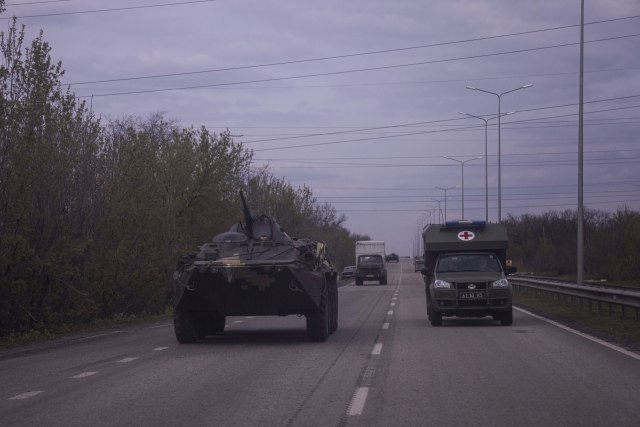 Last night, explosions erupted in the Ukrainian capital, and Minister Dmytro Kuleba accused Russian forces of firing cruise missiles at Kyiv during a visit by Guterres and Bulgarian Prime Minister Kiril Petkov, which he considers barbaric.

The Russian siege of "Azovstal" continues, while the UN Secretary General is trying to ensure the evacuation from the ironworks.

"Russian President Vladimir Putin has already said once that civilians are free to leave the Azovstal steel plant, while militants must lay down their arms," Kremlin spokesman Dmitry Peskov said last night.

The U.S. Congress approved the draft law which envisages a simpler mechanism for the delivery of defense equipment to Ukraine and the countries of Eastern Europe.

The Indonesian president claims that Putin plans to attend the G20 summit, reports Bloomberg. It should be reminded that Volodymyr Zelensky announced a few days ago that he had received an invitation for the G20 summit.

Video of the last street fights in the Azov region

The governor of the Kursk region in Russia, Roman Starovoyt, announced that mortars were fired in Ukraine this morning at the border checkpoint in the village of Krupec, and that there were no casualties or material damage.

"The border checkpoint in the Rila district of the Kursk region was shelled on Friday morning, there were no casualties or damage," Starovoyt wrote on the Telegram, reports TASS. He specified that the border checkpoint in the village of Krupec was shelled from mortars around 8:00 a.m., and that Russian border guards and soldiers returned fire on the "positions of the attackers".

The checkpoint on the Russian-Ukrainian border in the Glushkovsky district of the Kursk region was shelled from mortars on the Ukrainian side on April 23, and the fire engulfed the building of the Russian Federal Service for Veterinary and Phytosanitary Supervision and no one was injured, according to TASS.