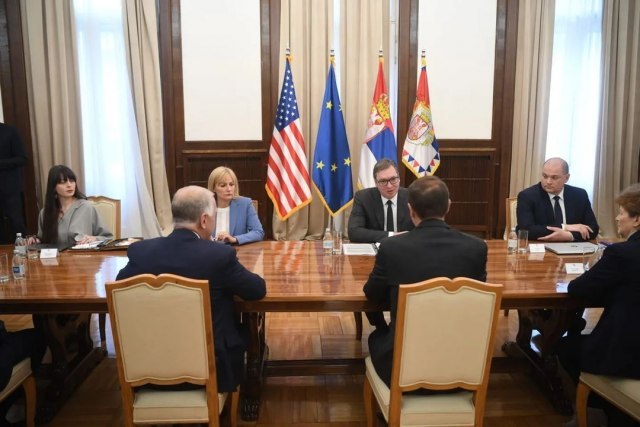 They discussed bilateral cooperation, Serbia's European integration, the situation in the region, energy and the crisis in Ukraine.

President Vučić pointed out that the improvement of cooperation with the United States is one of Serbia's foreign policy priorities, the Presidency of Serbia announced.

"Trade exchange will reach the amount of 1.2 billion dollars this year, which shows significant progress in our economic relations. We hope for additional intensification of various types of cooperation and realization of specific projects of mutual interest," Vucic said.

On the occasion of the crisis in Ukraine, Vučić emphasized Serbia's commitment to respecting the principles of international law, territorial integrity and political independence of states, as evidenced by Serbia's vote in the United Nations General Assembly and other international bodies.

"That is one of our priority foreign policy goals and Serbia's strategic commitment," said President Vučić.

Talking about the situation in the region, Vučić emphasized that Serbia respects the territorial integrity of Bosnia and Herzegovina, as well as the Republika Srpska within BiH. He added that it is of key interest for Serbia to preserve stability in the region and strengthen cooperation in all areas, especially in the field of economy, because only such a region enables sustainable development of Serbia itself.

In this regard, Vučić, as an example of successful regional cooperation, cited the "Open Balkans" Initiative, which aims to further develop the region and raise the living standards of all its citizens.

U.S. senators congratulated President Vučić on his victory in the recent elections. They emphasized the importance of cooperation between Serbia and the United States, underlining that the improvement of relations between the two countries leads to the strengthening of economic and political cooperation.

Welcome to Belgrade, Senators Shaheen, Tillis, and Murphy! Your visit underscores the importance of our partnership. Serbia plays a vital role in the region’s progress and prosperity. 🇺🇸 stands ready to support stronger alignment and ties between 🇷🇸 and its EU neighbors. pic.twitter.com/6pQr85mhla