BELGRADE -- In the presence of Viktor Orbán and Aleksandar Vučić, the Belgrade-Novi Sad railway was launched within the Belgrade-Budapest international railway.

BELGRADE -- In the presence of Viktor Orbán and Aleksandar Vučić, the Belgrade-Novi Sad railway was launched within the Belgrade-Budapest international railway. 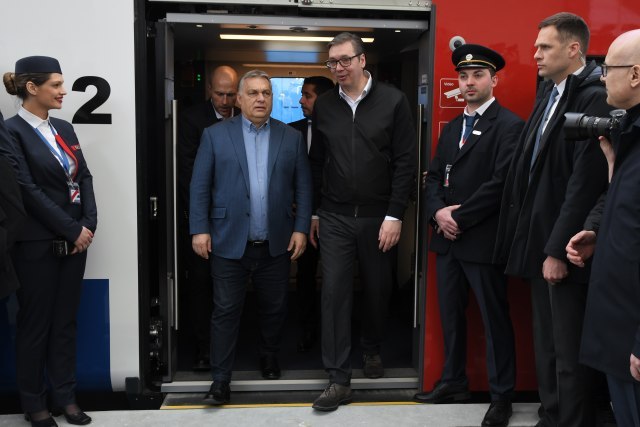 "This will further bring Serbs and Hungarians closer, Budapest will be reachable for two, two and a half hours. It is unbelievable what kind of connection it will be. I am overjoyed, this is history for us," President of Serbia pointed out.

"It's really unbelievable that we will be in Novi Sad in half an hour," Vučić added.

Prime Minister Ana Brnabic said she was too happy about this, adding this only shows how different Serbia is today.

“I can only imagine how much it will affect the quality of life, when a student from Belgrade is able to travel to Novi Sad for classes. This is new Serbia,” she stressed.

Orbán noted that the two countries and two capital cities are being connected today and that the life was made easier for the Serbs and the Hungarians. He also said that the friendship between the two nations has never been closer than it is today.

"Soko" reached Novi Sad in 33 minutes: More than 10.000 people gathered to welcome it

"The biggest challenge was that we were physically isolated from each other. We are now building a connection between the north and the south. Your president and I have invested a lot of effort to build friendship between Serbs and Hungarians," Viktor Orbán said.

"Our history has not always been easy, but it is Viktor who changed everything with his energy. We can always count on his friendship and the friendship of the Hungarians," Vucic pointed out.

When they arrived in Novi Sad after 33 minutes, Vučić and Orbán addressed the gathered people at the station.

"This is your great day and we Hungarians congratulate you on it sincerely. I have come to convey to you the sincere congratulations of my people. For the past 70 years we have connected countries east-west, and in the meantime we have forgotten how important it is to connect territories. It took many hours to get from Belgrade to Budapest and that is not a normal thing in the 21st century. We have made an alliance with your President Vučić and we want to change that situation and we will. And this is one proof for that", Orbán said.

"As a result of cooperation, these two peoples are very close, friendship has never been as close as it is now. We are a little behind you, you have progressed faster, but I want to promise that by 2025 this line between Belgrade and Budapest will be operational", said the Prime Minister of Hungary.

"I can't describe to you how proud I am. After 60 years, we renovated the station," Vucic pointed out.

"In just 33 minutes, you will be able to reach Belgrade. Part of our dreams are coming true. I am grateful to the citizens of Serbia that we had the strength to set out on the path of the future and be the engine of growth," he said.

"I am grateful that Serbia has friends, just like it has in Hungary and Prime Minister Orban," he added. "Our high-speed railways were built by Chinese and Russian friends, they built the future of our country together with us. The supervision was performed by the Germans and the trains were provided by the Swiss," Vucic explained, adding that Serbia paid for it all.

"We are facing great turmoil and crisis, and we are aware of the importance that the railway has for the country," said the President of Serbia. "It is the safest, simplest system for land transport. If we continue, the whole of Serbia will be networked with the most modern railway," Vucic announced.

"I think that the contours of the infrastructurally networked Serbia can now be seen," he emphasized.

Today, after the opening of the high-speed railway Belgrade-Novi Sad, which he passed together with the Prime Minister of Hungary Viktor Orbán by the high-speed train "Soko", President of Serbia said that Serbia is going into the future in this way and that the railway is a symbol of our country's progress.

"At the beginning of our journey, the paradigm about Serbia, which is constantly late, was a ghostly obstacle, and I am grateful to the citizens of Serbia for having the courage to set out on the path of the future. Serbia will be the driving force of economic development of this part of Europe," Vucic said.

"That is how friendships are built and I am very proud of that," Vucic said in front of a large number of gathered citizens. "Thanks to you, we are building history today", Vučić told them.

The Belgrade-Novi Sad high-speed railway was completed at the end of last year, and after that the railway was tested, on which trains will reach speeds of up to 200 kilometers per hour, so the journey between the two cities will take about 35 minutes.

"This is the image of a new and modern Serbia, which will be the driving force of economic development of this part of Europe," said Vucic.

In the promotional period from today to April 30 in fast, electric double-decker Inter City trains "Soko", as well as in Regio trains, the price of a one-way ticket for 1st and 2nd grade, on the route from Belgrade to Novi Sad will be 300 dinars, "Srbija Voz" a.d. announced today.

Children under the age of seven who do not require a special seat will be transported free of charge.

Regio Express trains on the route Belgrade - Novi Sad will not run at the moment.

The Inter City train does not issue tickets, but only validates via mobile terminals and sells bicycle tickets and excessive hand luggage. Passengers are not allowed to enter the train without a ticket, it is stated in the announcement.

Passengers who have a printed air ticket "Air Serbia" on the route Belgrade-New York, will be transported free of charge in the Inter City train "Soko" on departure or return, on the route Belgrade Center-Novi Sad-Belgrade Center. These passengers have free seats in the seating areas that are not subject to reservation. No other benefits will apply during the promotional period.

Due to the continuation of works at the New Belgrade station, trains at this station will not stop at the moment. From today at 11 o'clock "Srbija voz" a.d. introduces a new and expands the existing system of online purchase of regular tickets. Passengers will be able to buy regular tickets for all domestic routes via the web application "Srbija Voz" a.d. and via mobile phones, by downloading the app for free via Google Play and the App Store.

By buying tickets electronically, passengers get a 5 percent discount on the total ticket price, it is noted in the announcement.

The 74.9-kilometer-long high-speed railway from Belgrade to Novi Sad will take about 35 minutes. The value of the works on that part of the railway is 935 million dollars.

The high-speed train "Soko" will start regular traffic for passengers from Belgrade to Novi Sad on Sunday, and a one-way ticket will cost 300 dinars in the promotional period, while the transport of children under seven will be free.

The railway was tested by measuring trains of German railways, and on January 21, the speed reached 201.5 km per hour.

The construction of the Belgrade-Budapest high-speed railway is the largest and most important infrastructure project in this part of Europe.

The future high-speed railway to Budapest is part of China's global initiative "Belt and Road" for infrastructural connections between Europe and Asia, and when it is completed by train, it will take less than three hours to travel on that route.

European interoperability standards have been applied in the construction, and the railway is electrified and equipped with modern signal-safety and telecommunication devices (ETCS level 2).

All crossings with the road are leveled, which means that there are no road crossings.