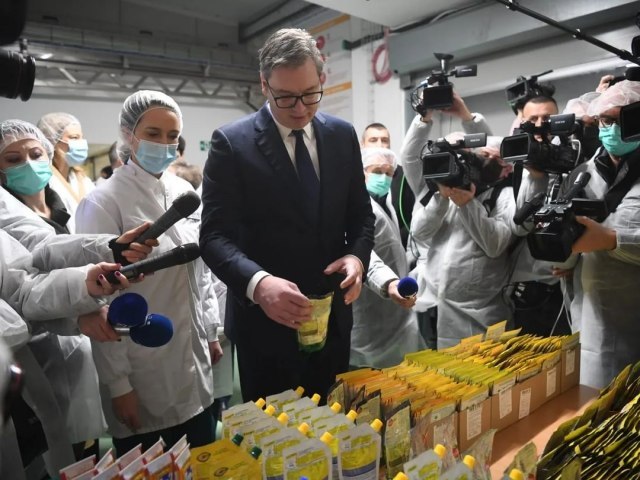 President of Serbia, Aleksandar Vučić, attended the ceremony on the occasion of the completion of the first phase of works on the construction of the new Nestlé factory in Belgrade.

"The space is ideal for you," the president said, visiting the plant with the company's employees. They introduced the president to the current mode of production. The president also joked that he would "always buy mustard 'C' or mayonnaise 'C' rather than 'Tommy'. God will know that it is produced by the same factory, Nestlé factory".

"I would rather buy 'Spice C' than 'Vegeta', because I buy domestic products," the president said, and he was told that this factory produces 4.000 tons of this spice a year.

The President greeted all the workers and wished them good health.

"The first part of the construction will be completed soon, the biggest works are those that are being done in the interior," the factory representatives said. Visiting the part of the factory that is intended for the production of vegan food, Vučić stated that we must take more care of such people, and that he personally did not know that there are many such people who have a different approach to life.

"I realized that we will have to take even more care of such people. I did not know that there are so many people, people who perceive it as a different approach to life," Vucic said. The factory stated that they expect that the works will be finished by July. "When we open the Surcin-Belgrade highway now in October, in November at the latest, it will be much easier for the workers of this factory," the president said.

According to him, at this time when there is not much stability in Europe and the world, we are able to open new factories. "I am proud of that," Vucic said. He added that he notes that people are increasingly looking for vegetable-based food.

"For Spain and the Netherlands, this will be one of the main products. I am proud of all our workers, both in the first and second section of the factory. I am happy to have such people. With work, hard work and great energy you can achieve everything. We are far behind the developed countries, now we are reducing the discrepancy," said the president and wished them good luck in making "vegetable burgers".