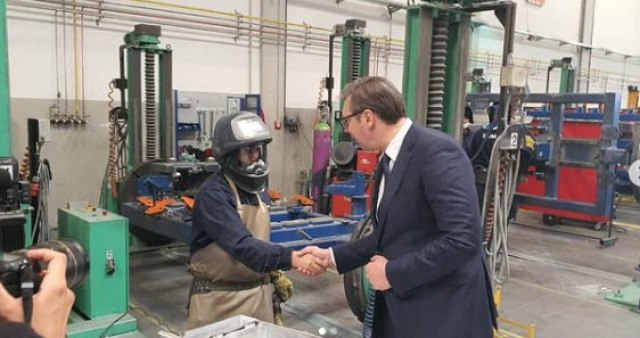 The President began his tour by visiting the Siemens Mobility plant in Cerovac near Kragujevac.

Vučić held a meeting with the heads of the company, and then visited the plant for the production of elements for rail vehicles.

"We dreamed about this," Vucic pointed out on that occasion.

The president got acquainted with the production process, talked to the workers and asked them about the working conditions in the factory. Vučić said that Siemens is also making trains for the regional railways that Belgrade needs for lines, for example, to Lazarevac and other suburban places.

"Siemens is great, and we will have other factories in Serbia that will produce trams and trains," Vucic said during the tour. He says that the Germans are very satisfied with the workforce in Šumadija and that is why they are investing especially in the Technical School and the University of Kragujevac, within the framework of dual education. "We must further strengthen dual education in Serbia," the president added.

German companies employ more than 70.000 people in Serbia, he said. He learned on that occasion that in Siemens in Kragujevac, the average monthly salary of a welder is 70,.000 dinars and commented that it is better than the average salary.

The tour is attended by the Minister of Construction, Transport and Infrastructure Tomislav Momirović, the Mayor of Kragujevac and the Deputy Mayor of Belgrade Goran Vesić and representatives of Siemens and the German Embassy.

Siemens has 894 employees who produce rail vehicles, and at the end of last year, the first tram intended for the German market came off the production lines.

The first tram produced in the Siemens Mobility factory in Kragujevac, 37 meters long, was shipped to Bremen on December 14. The company still has a lot of orders for trams that will transport passengers in the cities of Germany.

In the past two and a half years, that factory has gone through a process of transformation from component manufacturers to the production of complete trams.

Siemens has two factories in Kragujevac, one which it once bought from the company Milanović Engeneering and where it makes positions for its rail vehicles, and the other in the newly formed industrial-technological complex Mind Park, where it produces entire trams.

After that, President Vučić will have a meeting with the representatives of the Šumadija district in the City Administration of Kragujevac.

During the tour of the municipality of Knić, we plan for the President of Serbia to visit the Elementary School "Vuk Karadžić", which was founded in 1842, and three years ago it was completely renovated and energetically adapted with funds from the republic budget.

At the end of the visit to the center of Šumadija, Vučić will visit the "Aleksić Prvi" distillery in the village of Guberevac, which produces fruit brandies.

Just to recall, yesterday, during his visit to the Pomoravlje district, president also spoke about investments in Kragujevac.

"Kragujevac is so scattered and spread, the branch sewerage network is so extensive. We have to do both fecal and rain network, wastewater treatment plants. We are working on a bypass around Kragujevac... It's all rather expensive, calling for major investments. The bypass alone will cost 155 million euros, which will be done by about 10 Serbian companies, we did not want to let foreigners do that", Vucic emphasized.

According to him, with the road connection of Kragujevac, this city becomes the center "not only of Šumadija, but the center similar to Niš, being the center of all Balkan routes".