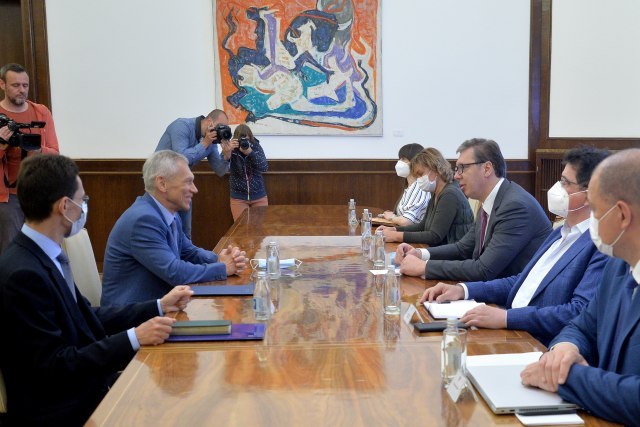 The meeting was held in the building of the General Secretariat of the President of the Republic, and photos were published on the official Instagram page "buducnostsrbijeav".

Vučić first thanked the Ambassador of Russia for the new quantities of Sputnik V vaccines delivered, which were immediately included in the vaccination process in our country.

Speaking about the planned continuation of the dialogue between Belgrade and Pristina, Vucic said that the days ahead will be difficult for our country, but that he would invest a lot of energy in Brussels to protect the state and national interests of Serbia, fighting for a compromise, Office for Media relations of the President of the Republic of Serbia stated.

Botsan-Kharchenko confirmed Russia's active support for the defense of the norms of international law and, thus, the territorial integrity of Serbia. The two interlocutors agreed that the policy of peace and cooperation is of the utmost importance for further development of the Western Balkans. Vučić and Botsan Kharchenko reviewed the progress of economic cooperation between Serbia and Russia and pointed out that joint infrastructure projects, as well as projects in the field of energy, follow the planned dynamics and will greatly contribute to the economic progress of our country and the quality of life.

Vučić and Kharchenko also discussed the next bilateral contacts between the officials of the two countries.