BELGRADE -- Defense Minister Aleksandar Vulin stated that a recorder of parameters from the MIG-21 plane that crashed in the Brasina region, near Mali Zvornik, was found.

BELGRADE -- Defense Minister Aleksandar Vulin stated that a recorder of parameters from the MIG-21 plane that crashed in the Brasina region, near Mali Zvornik, was found. 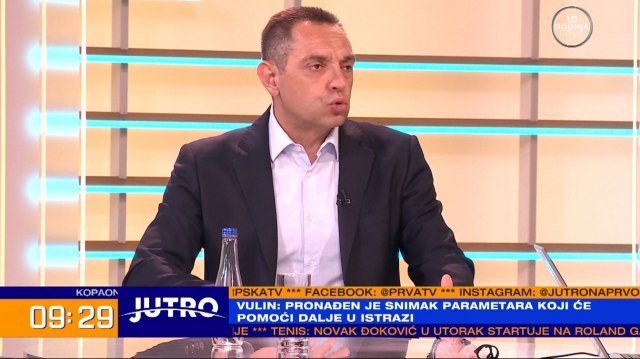 "The military commissions have finished their work, which means that all the material evidence has been collected. A flight recorder of parameters has been found, which is now being read," said Vulin, adding that the flight recorder is different from the black box that records conversations.

As he says, the procedure will last much shorter than a few weeks, but as he points out, that is only his opinion.

"No one can make the commissions work faster, they are completely independent. It is the prosecutor's office that will inform the public about the causes of the accident. The army cannot conduct the procedure, we are here to collect evidence," Vulin says.

There is still no explanation as to why the pilots did not catapult.

"The pilot has the possibility of catapulting. The decision is made by the one who commands the aircraft and he is the first to catapult. Then in a short time the second is catapulted so as not to collide. The profession will say that, we will come out with that."

Vulin did not answer the question whether flying was planned in that region.

"This would jeopardize the investigation," he said, adding that the flight schedule is strict and that "no replacement took place."

He also touched on the topic of suspending military exercises of the Serbian Army in the next six months.

"I think that this has shown the worst face of the EU and that it considers the policy of blackmail legitimate. We have thus preserved military neutrality. If we stopped the exercises with Belarus and continued with the United States and Russia, it means that Belarus is a bad guy," he said, adding that after that period, it will be decided whether to continue with the interruption of the exercises or to start them again.