BELGRADE -- This morning, President of Serbia, Aleksandar Vucic, met with the Serbian member of the Presidency of Bosnia and Herzegovina, Milorad Dodik

BELGRADE -- This morning, President of Serbia, Aleksandar Vucic, met with the Serbian member of the Presidency of Bosnia and Herzegovina, Milorad Dodik 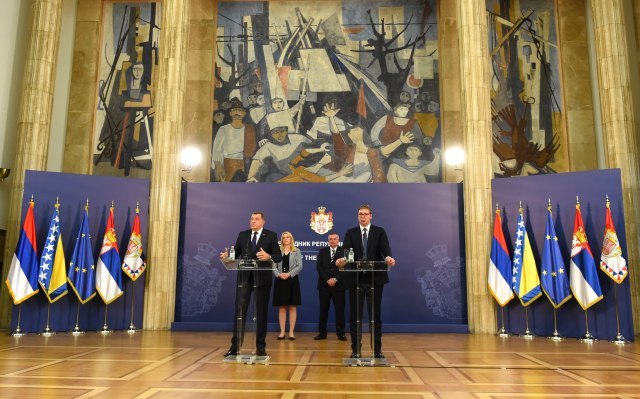 "From Monday, we expect Lajcak in Belgrade, then Moscow, followed by Washington... It is clear to you what that means in a technical, but also in an essential sense," Vucic said after the conversation with Dodik.

He conveyed that he informed the RS delegation about the facts regarding talks on the issue of Kosovo and Metohija, and talked about the difficult schedule in the coming days. "I introduced our guests to everything I knew, or everything I believe we can face, he said what the principles of Serbia are, how much we want peace and stability, but also what our interests are," Vucic said.

"We are expecting Lajcak as early as on Monday, June 22, then we are going to Moscow, Washington. Then there are other things I cannot talk about. The technical part is much less important than the essential part, which will be more difficult," Vucic said.

He introduced the guests, he says, with everything he knew, or with everything he believes we can face. "I said what the principles of Serbia are, that it wants peace and stability, but also that we have our interests that we must preserve and protect," he said.

Dodik was also asked about Kosovo, that is, about solving that problem from the point of view of the Republika Srpska, to which the President of Serbia joked that he would "be destroyed by Mile's answer".

"Serbia will never do anything that would not be in the interest of RS, or that anyone in RS would welcome as bad attitude of Serbia. We have always helped, are helping and will help, to be a right hand on which RS can rely, and that is all I have to say", President of Serbia said and added that" we do not need any nonsense and scandals on that issue".

Then Dodik's answer to the journalist's question followed, and he first said that he wanted to emphasize that talking about Kosovo ten years ago and now is not the same, because the position of Serbia is not the same.

He reiterated that Vucic stated that Serbia respects the territorial integrity and sovereignty of Bosnia-Herzegovina, but that the Republika Srpska has a different opinion, i.e. that it believes that it "accidentally found" itself in the Federation.

"We support Serbia in every respect. I am convinced that Serbia's position today is better in every way and that Serbia does not need to hurry in that regard and should do it best. Republika Srpska sees itself integrated with Serbia and no one can prevent that", Dodik concluded.

However, Vucic then took to the microphone again and repeated: "What Mile wanted to say is that Serbia supports the territorial integrity and sovereignty of Bosnia-Herzegovina."