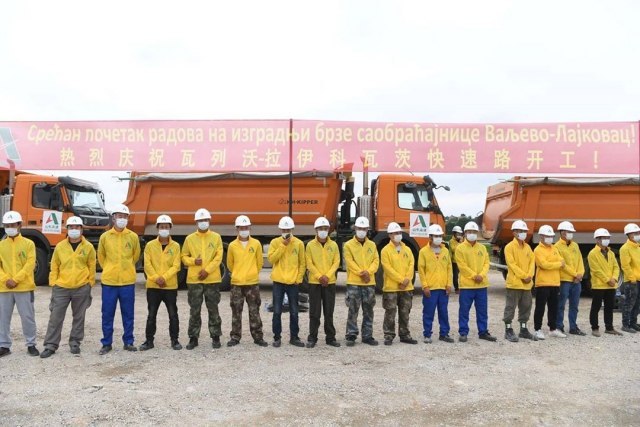 Vucic said that this is important for Valjevo, Lajkovac, Mionica, but also the entire Kolubara district.

He stated that by the end of 2022, it is realistic to complete the works on the road and watercourses.

"When we went to the west of Serbia earlier, the question was when the highway would arrive, when we opened the sections of the 'Milos Veliki' highway, the key question was always what will we, the people of Valjevo, do, where are we. We are starting work today. The Chinese company Shandong is working on the section from Lajkovac to Valjevo. The road will not go through the center of the settlement, and the riverbeds will be arranged, so we will no longer have the problems we had in previous years," Vucic said.

"When the pandemic passes, we expect Serbia to be even more interesting, and for EU countries, primarily because production costs and a good workforce are more accessible than anywhere else in Europe," Vucic said.

The plan is, as he said, for many people from Valjevo to return to their hometown, to work and live there to the same standard as the people in Belgrade.

"The Valjevo-Belgrade road, even if you drive the slowest, will take less than an hour," the president said. "Finally, the connection between Valjevo and Belgrade was made in the best and fastest way," Vucic added.

"Investors will want to come to Valjevo," he pointed out.

"I want you to work well and diligently and to have higher salaries," the President told the workers on the construction site.

A symbol of cooperation between Serbia and China

"Shandong has been working on infrastructure projects in Serbia since the beginning. Last year, we built the 'Milos Veliki' highway, which has become a symbol of our cooperation. Even when the epidemic broke out, our company stood shoulder to shoulder with the Serbian people and helped in accordance with their capacities. We are happy that the economy is now gradually recovering. Today, we will attend the ceremonial start of work on the construction of this loop. Our company is extremely honored and we feel great responsibility. We are confident that with the support of the Government of Serbia and the Chinese Embassy thereby contributing to the renewal and construction of traffic infrastructure in Serbia", Zhang Jianchao, CEO of Shandong said.

"Infrastructure is an important area of ​​cooperation between Serbia and China. I want to thank the President and the Government of Serbia for the trust shown in Chinese companies," Chinese Ambassador to Serbia Chen Bo said.

"Chinese companies are ready to contribute to the cooperation between our two countries in the field of infrastructure with their knowledge and technology," the Chinese Ambassador concluded.

The works on the construction of the fast road Iverak - Lajkovac, which will connect Valjevo with the highway "Milos Veliki", started today. When all the works are finished, it will take 35 minutes to travel from Belgrade to Valjevo. The total length of the section is 18.3 kilometers, and the works, which are performed by the company "China Shandong" in accordance with the state agreement between Serbia and China, are worth 158 million euros.

The expressway will have lanes in both directions and is designed for speeds of up to 100 kilometers per hour. There will be 25 buildings on the route, one loop, a total of 19 bridges, of which the two longest are 1.5 kilometers long. The deadline for completion of works is 36 months.

Part of this project is the complete arrangement of the river Kolubara and watercourses, which will prevent further flooding of this part of Serbia. The Iverak-Lajkovac expressway is part of the state road Loznica-Valjevo-Lazarevac and represents a cross connection in the road network of Serbia and will connect parts of Republika Srpska, i.e. Bosnia and Herzegovina with the highway "Milos Veliki" and Corridor 10.

The beginning of the works was attended by the Ambassador of China, Chen Bo, and the Deputy Prime Minister and Minister of Construction, Transport and Infrastructure, Zorana Mihajlovic, as well as representatives of "Roads of Serbia" and contractors.