BELGRADE -- I am worried about the potential escalation of conflict in the region, but we are working to prevent it from happening, said Serbian President Aleksandar Vucic

BELGRADE -- I am worried about the potential escalation of conflict in the region, but we are working to prevent it from happening, said Serbian President Aleksandar Vucic 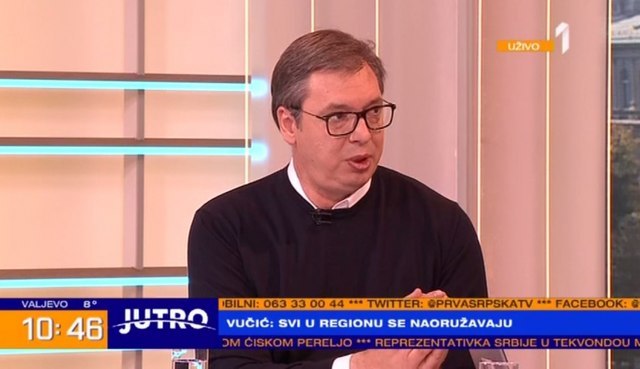 Serbian President Aleksandar Vucic said today that he is concerned about the possible destabilization and escalation of conflicts in the region and that Serbia is doing everything to prevent it, as well as that our country must arm itself, as all the countries around us do.

"I am always concerned and we are doing everything we can to prevent destabilization in the region. This Novi Sad initiative with Albania and Northern Macedonia is very important to us as it is also a peace and political initiative, but also economically important for us", said Vucic visiting Prva TV.

He says Bulgaria, Romania, Hungary, Croatia and other smaller countries are arming themselves in accordance with their capabilities.

"We see who is also arming Albanians in Kosovo and what helicopters are being marketed by Montenegro and we are closely monitoring all that", the Serbian President said.

"You have to think about radar - electronic warfare and interference, everything is working on a different level now. Why is everyone arming themselves in the world - there is no longer one police officer in the world, and there are many players", Vucic said.

"Everyone cares about themselves and knows that there is no more unity, as it was when 19 countries invaded Serbia and everyone is looking at how to protect themselves. Will this be a source of conflict in the future ... We must not be weak because someone will always find the 'Leibniz principle of sufficient reason' if we present an easy prey", Vucic concluded.

"Kurti is an open threat, but no one will endanger Serbs in Kosovo"

Serbian President Aleksandar Vucic said he understood Albin Kurti's statement that he would solve Pristina's biggest problem - Serbia's presence in the north, as an open threat, but said no one, not even Kurti, would be able to threaten Serbs.

"I do not want to respond with offensive vocabulary. I can only say that it will not endanger the Serbs," Vucic said while visiting Prva TV.

He says Albanians are terribly nervous because they see that things are not going as planned.

"It was an infection caused by the votes obtained by the Serb List, which seemed so infectious that they had to do it, and the other that they made calculations as to whether and how to include Pacolli's party into the government. That's why they made a scandal", he explained.

According to him, there is neither poison nor any infectious reaction, that everything is nonsense that shows the level of nervousness and what everyone is prepared for.

"It shows that they are very dangerous, and that's why I said that something like 2004 when the DOS regime allowed pogrom of the Serbs, as well as the operation "Storm" will never happen again, he said.

"For Maja Kocijancic, I always had another question concerning the rights of Serbs in Slovenia. I made a joke because the whole world saw the story of poisoning, the pro-Albanian media wrote about poisoning from Serbia, now they are dead silent", he explained.

He said that people in Serbia are not ready to hear the truth, because they have gentle ears, and they prefer to listen to fairy tales.

"I will not lie to the people," he said regarding his statements on the real situation in Kosovo and Metohija.