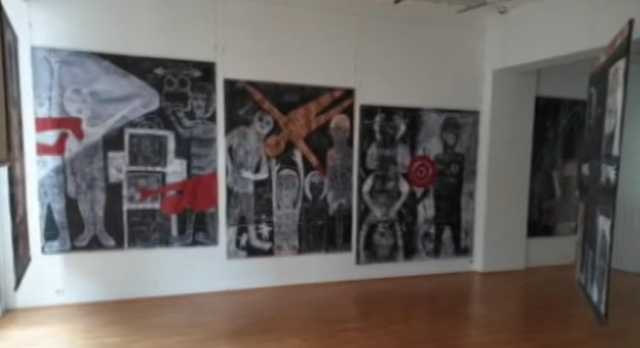 "The exhibition is here, it's interesting, but it's aggressive in a certain sense. The exhibition is set up so that the central part of the gallery is blocked. So, a round table, a performance, a concert cannot be held," he said.

"I'll be rolling it up tonight as well, because in order to put 50 chairs for a projection, the central space must be freed up," he added.

Pavlovic told Prva TV that the paintings had not been removed from the walls and that he was not ordered from the Serbian embassy in France to remove the exhibition, as stated by the coordinator for media relations at the center of Paris, Natasa Pejin.

Adding that after making this announcement, Pejin started getting threatened emails, Pavlovic said that "behind everything is the effort of some to take over his job."

The Ministry of Culture and Information announced earlier on Wednesday that it will insist on determining whether a part of the exhibition dedicated to the 20th anniversary of the start of NATO 's aggression against Serbia had been temporarily removed from the Cultural Center of Serbia in Paris and announced that "in the event of confirmation of censorship," it will urge "adequately sanctioning the persons who participated in endangering the freedom of artistic expression."

The ministry said in a statement that the exhibition "Serbia in 1999 - 20 years after - while the bombs were falling" was part of a program approved by that department and had been "allegedly temporarily removed under the pretext that its contents could be unpleasant to certain officials, who attended a cocktail on March 26."

Natasa Pejin, previously announced on social networks that only two days after the opening of the exhibition, paintings by Biljana Willimon and Vladimir Velickovic had been removed.

Pejin wrote that on March 25 she met with director Radoslav Pavlovic, who told her that the center was hosting a reception, and that the Serbian embassy in Paris ordered them to remove the paintings, so that "NATO officers who will be present are not made to feel uncomfortable."

"The only thing that is true in this whole story is that there are four canvases in the middle of the hall facing with their backs, that could come in the way when a conference is held, all the other canvases were on the walls, they were not in the way. Everything has been removed. There are photographs, and there is video surveillance there," said the director of the Historical Museum Dusica Bojic.

Painter Vladimir Velickovic, whose work has been "temporarily removed" from the exhibition, assessed that such a move is a gesture of undue censorship, because, as he said, it was an opportunity for those who bombed Serbia to see all the horror that their campaign left behind.

"I am desperate. I am embarrassed to in a way belong to this race of ours which is not capable of marking in a dignified way an event like the 20th anniversary of the NATO bombing," Velickovic told the daily Danas.

He said that nobody from the Center informed his about the relocation of the exhibition, and that his four meter-long painting could not be removed "because they had no place to put it."