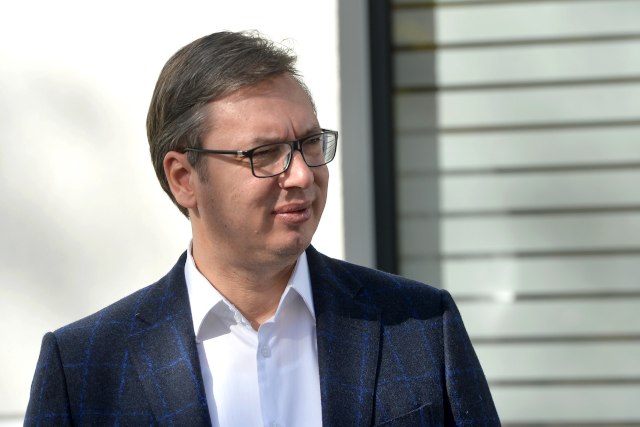 Vucic is seen at the KBC in Belgrade on Wednesday (Tanjug)

The president was asked by reporters - after touring the newly built X-knife Center at the Clinical-Hospital Center (KBC) in Belgrade - why he never presented his plan and the details that he had indicated, as he said, to the leaders in Brussels and to the Pristina side.

In his response, Vucic said that "various ideas are being presented."

"In countless places I spoke about the need for a compromise, and I will never speak about the details until we have something concrete. To one word of mine, which was normal - that we need to establish a border, since we don't know where the border is today - many have reacted. I know what is written in our country, but when I go to Kosovo, there is a second border waiting for me set by those who ruled before us in 2011," he said, an apparent reference to Serbia's previous authorities.

"Kosovo declared its independence in 2008," Vucic continued, "also during the times of those who now give patriotic lectures. In 2010, with our terrible moves, we contributed to the judgment of the International Court of Justice, which goes at the expense of our interests," he explained.

Vucic emphasized that he was looking for a compromise all the time, "which would be painful for both sides, where both parties would lose and gain something."

When it comes to talking with multiple parties, the details should never be spoken about, he said - "unless one has something in one's hands."

"I have nothing that would be accepted by anyone, so I don't. We will never bring any act without checking with the people and the Assembly. Will there be anything to check? I'm afraid not," Vucic said.

The president stressed that he "did not provide any details, because only those who want everything to fall through could do that."