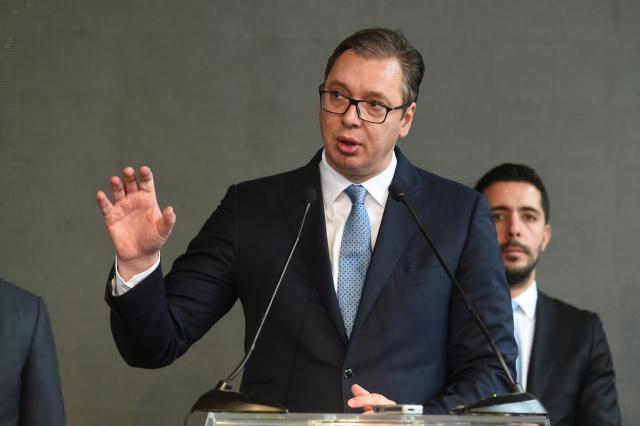 He died in the hospital shortly after reportedly "taking poison" in the courtroom - during the reading of the Appeals Chamber verdict, that also declared Croatia's state leadership of the time complicit in a joint criminal enterprise targeting Muslims in Bosnia.

Speaking on Thursday, Vucic said that he would nevertheless "have things to say to people in the EU about their double standards and statements about Serbia and Croatia regarding the latest judgments."

He said he would "try to underline" during a meeting today with representatives of EU countries what Serbia has been exposed to, and how they sometimes "play blind deaf, and sometimes also a little dumb, when it's about somebody else."

Vucic said that after last week's ruling against VRS General Ratko Mladic, "only statements accentuating the future and expressing respect toward all victims, without running away from difficult topics, could be heard from Serbia."

"And what were the reactions in the region... nobody mentioned the future. They were dealing with Serbia and the Serbs, unfortunately," Vucic said, and asked:

"How is it possible that everyone has been convicted for something, except for any crime committed against the Serbs?"

According to him, "95 percent of citizens of Serbia think that the Mladic ruling was anti-legal, bad, and did not correspond with the facts."

"But what would it be like if I as the president went before the public and said I was against the ruling, that he is a hero, and that we will try to contest the ruling?," Vucic asked, apparently referring to reaction out of Croatia to the Prlic et al. verdict.

"And from Croatia, they're criticizing. 'You Serbs, pay attention what you say about the Hague, while we who are in the EU will speak against it' - one single judgment and they don't like it. People, who are you kidding? What is it you want to make us into?"

Vucic also spoke about the missing persons to say he "wants this to be solved," and add, "in Croatia's public, you can't say that more Serbs than Croats went missing (during the war). The Krajina Serbs can't have killed themselves?"

He added that it was "hypocritical" to criticize Serbia for allowing retired Yugoslav Army General Vladimir Lazarevic - himself a Hague convict - to "on one occasion deliver a lecture at the Military Academy."

"Are you trying to make us look not normal? That what applies to you does not apply to us? Are you normal? And then they tell us we'd failed to fulfill something for the chapters. Who failed? Do you want us to beg you? We won't. Don't open a single chapter," Vucic said, in apparent reference to Serbia's EU accession negotiations.