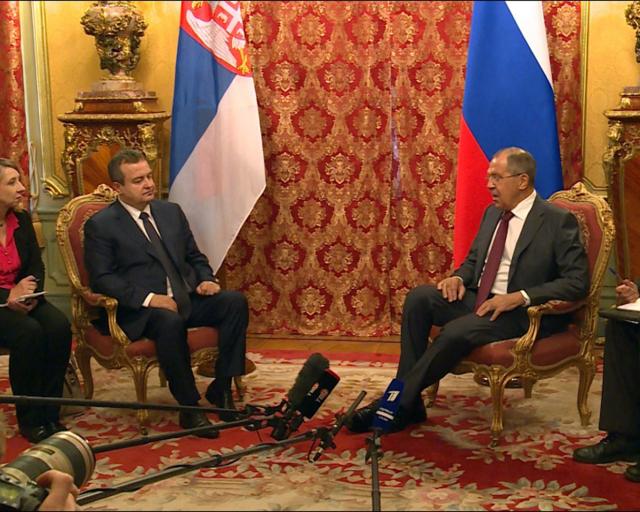 "Our relations are on the rise in all areas," Lavrov said, according to TASS.

"Our presidents have regular contacts, and the dialogue between them is based on trust that helps development of cooperation in all fields," Lavrov added.

Lavrov recalled that last week he met with Serbian President Aleksandar Vucic on the sidelines of the UN General Assembly in New York.

"He confirmed his commitment to the agreements reached at the highest level, and we concluded that all these agreements have been fulfilled," Lavrov said.

The Russian diplomacy chief also welcomed the work of the Russian-Serbian intergovernmental commission for trade, economic, scientific and technical cooperation led by Ivica Dacic on the Serbian side, stressing that its work was "fruitful" - while "the volume of trade was growing."

"Next year, we will mark anniversary dates related to World War II events, and we will also mark them together," Lavrov said.

He added that Moscow and Belgrade are "closely cooperating as part of the UN."

"We are heading in the right direction, let us see today what more we can do," Lavrov added.

In his conversation with Lavrov on Friday, Dacic said that Russia's support to Serbia's territorial integrity and independence was of utmost importance to our country.

The head of the Serbian diplomacy and the first deputy PM "thanked Russia for its continued support to Serbia," Tanjug reported on Friday.

"I want to express my special thanks to the Russian Federation, President Vladimir Putin and my friend and colleague Sergei Lavrov for the consistent support that Russia provides on the most important issue for Serbia - which is its territorial integrity and independence," Dacic said.

Dacic also pointed out that the goal was to increase trade exchange, which now exceeds two billion euros - and added that there were "real possibilities for this."