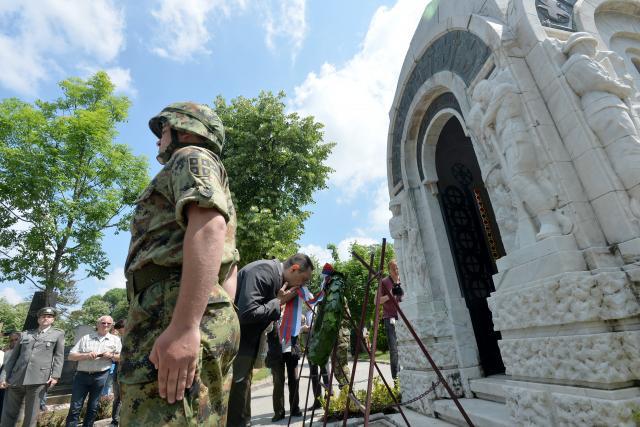 Wreaths were laid today by members of Putnik's family, representatives of the Ministry of Defense, Minister of Labor, Social, and Veteran Affairs Aleksandar Vulin, Belgrade City Manager Goran Vesic, and others.

"Vojvoda Radomir Putnik was the most prominent part of a victorious and immensely brave generation. He modernized the Serbian Army, introduced rules from the modern world of the time, but most importantly, preserved its freedom-loving spirit, and the unwavering desire to fight for freedom," Vulin told reporters after the ceremony.

"Unfortunately, he ended his life (in 1917) ill, far away from Serbia. He did not live to see the Serbian Army return to Serbia victoriously, but without him, without his work, his command, his life dedicated to that army and to that country, neither the victorious return nor that great generation would have happened," Vulin said.

The minister described Putnik as "a top professional and one of the greatest military strategists of his time."

Goran Vesic also spoke to say that Vojvoda Putnik is one of the greatest figures in our history - and that it is "nice" that anniversaries linked to him are being marked.

Vesic thanked Vulin for his ministry's good cooperation with the city when it comes to marking important events from the Serbian people's history.

"By remembering great people like Vojvoda Putnik - who, while seriously ill, organized the withdrawal of the Serbian Army through Albania (to Greece), and who didn't live to see a free Serbia, we show our respect toward our past, and nations who don't remember their past have no right to their future," said Vesic.

Radomir Putnik was born on January 24, 1847 in Kragujevac, a town in central Serbia. He became the first Serbian field marshal and the chief of the Serbian Kingdom Army's general staff in the Balkan Wars, and during the First World War.