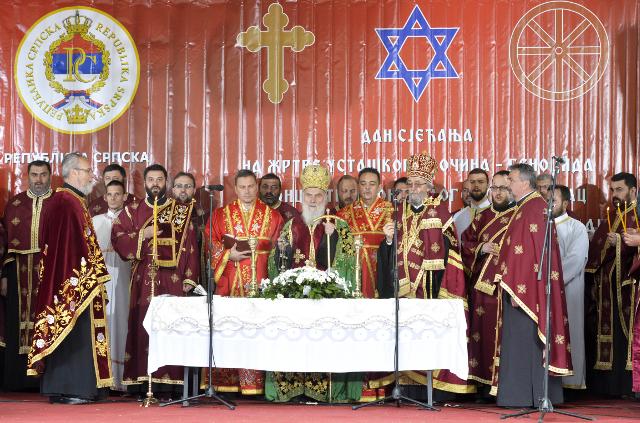 By the end of the Second World War and the disintegration of this Nazi-allied entity, hundreds of thousands of Serbs, Jews, Roma and anti-fascists were slaughtered there.

The Serbian government said that Vucic addressed the ceremony marking Day of Remembrance of the genocide in Jasenovac, and said on this occasion that "without the knowledge of the past it will be hard to build a better future for our children."

"It is our obligation to be here for the descendants of Jasenovac victims," he said, and added: "We have to be here so that the events of seven decades ago never get repeated, but also to send a message that we will never forget what happened to us and that we strongly oppose attempts of repeating that."

"Here, in one of the worst places in then occupied Europe, I am grateful to President of the RS Milorad Dodik that Serbia and the RS are together marking the events of the past," the Serbian president-elect said.

Vucic also criticized the attempts to restore the Ustasha ideology and the revision of history and attempts to rehabilitate Alojzije Stepinac and thus remove responsibility for the crimes committed against the people and clergy of the Serbian Orthodox Church, the Serbian government said.

According to Beta, he said that there were still people in Croatia "who wish there were no Serbs there" or their cultural, religious and other symbols, adding that Serbia wanted and had to work with "a normal Croatia," where people will not be judged by whether they are different.

Vucic repeated that Serbia would "never let anyone to have another Flash or Storm" - referring to Croatian military operations against ethnic Serb areas of the country in the mid-1990s - and adding that "staunch opposition must meet anyone who wants to redraw borders in the Balkans, who wants a 'Greater Albania' and some other states, not asking the rest of us, especially not the Serbs whose territory they want to seize."

Milorad Dodik also spoke to say that the Serb entity "has no intentions of destabilizing the region, that it was committed to lasting peace, but that it wanted Jasenovac to be marked as a site of genocide against the Serb people, not as a site of victims of war."

Dodik said that the RS was created "so that Serbs there could be free, and refused to shake hands with US Ambassador to Bosnia-Herzegovina Maureen Cormack, whom he has declared a persona non grata in the RS, "blaming her for his being blacklisted in the US," according to Beta.