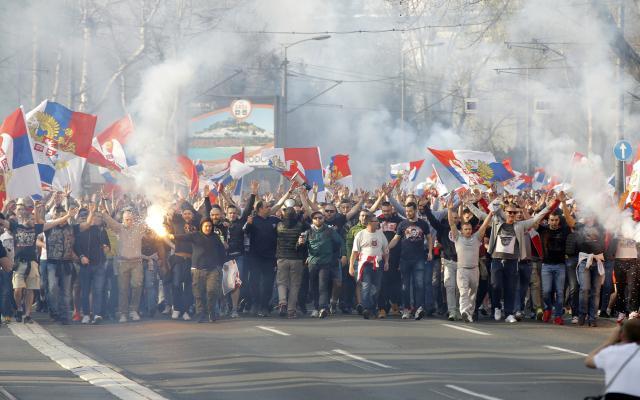 The Serbian Ministry of Internal Affairs (MUP) made no statement about the incident until the media broke the news. The MUP then confirmed that the fight took place, but not that the injured persons were Russian citizens. This left room for speculation and various versions of the event.

On its Russian language website, Russia's TASS reported that the Russian fans came under attack by supporters of Red Star's crosstown rivals, Partizan. But the agency's English website said the attackers were "Albanians."

"Eyewitnesses said the group of Russian and Serbian fans, who were marching with flags after the match on Saturday, were attacked by the Albanians. The fans chased the attackers away, but three persons were wounded," the English language report said.

The Russian website - and a subsequent report in English, read as follows:

"A group of Russian and Serbian fans were marching with the flags of their clubs after a match between Moscow’s Spartak and Serbian football club Crvena Zvezda (Red Star) on Saturday, when they were attacked by fans of Belgrade’s Partizan club in central Belgrade. The conflict sparked off over a red-and-white scarf one of the fans was wearing. Three Russian fans were taken to hospital."

The same source said that the police had launched an investigation and already had two persons in custody.

Russia's Sputnik website, meanwhile, is reporting that the attackers were not football supporters, but "a group of people."

Russian embassy media attache Yury Pichugin confirmed that two Russian citizens were injured during the incident, and named them as Maxim Butrin and Pavel Bodrov, adding that "for now, the Serbia police are dealing with this case."

The website also said it learned that the more seriously injured Russian had surgery and that his life is not in danger, while the police continue to look for the attackers.

The home side won (2-1) the Red Star-Spartak friendly, dubbed "the brotherly derby."