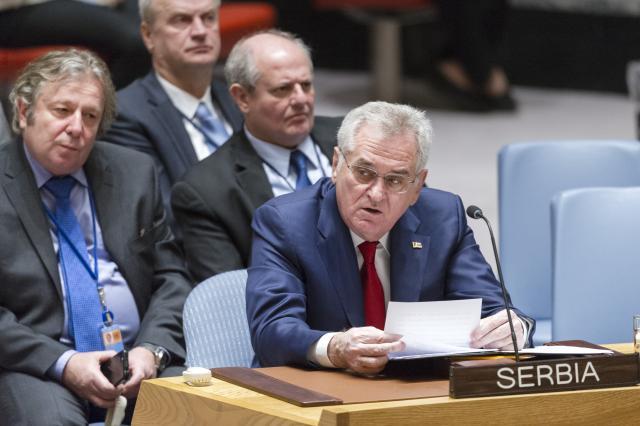 According to Nikolic, among those topics was "how to influence Pristina to meet all its obligations under the Brussels agreement."

"I was addressing more the sponsors of independence so that they realize that Albanians must fulfill their obligations because Serbia makes and implements agreements in good faith," the president told Serbia's state broadcaster RTS, Beta has reported.

Nikolic said Serbia must not be allowed to falter, to drop the level of decision-making to local governments, "because there Albanians can have too much influence."

"We should work as before," said Nikolic.

He said that the Security Council session was "very difficult - but each session shows how other countries behave."

"Some countries that have recognized (Kosovo's) independence have adopted much softer rhetoric toward Serbia, and are aware that Belgrade has done a lot, but the US and Great Britain hold their position firmly," he said.

Nikolic said that the representative of Kosovo, Ambassador (to the US) Vlora Citaku spoke "very rudely" and said that the agreements and the formation of the Community of Serb Municipalities (ZSO) depended on whether they were "in accordance with the constitution and laws of Kosovo."

"She was bringing us back to the past, she spoke lies about killings of women and civilians," Nikolic said, adding that neither Citaku nor those who "support Kosovo's independence terribly" had any basis at this time to accuse Serbia of anything.

Nikolic said that countries that support Belgrade say it openly, while those who have recognized Pristina's independence speak in "a veiled form - and cannot support the performance of an ambassador who said that Haradinaj is an honorable man."

"I think we have a lot of evidence in our hands, and a good position and we must use it," the president said.

Nikolic said that representatives of "certain countries" want the Security Council to in future meet on Kosovo twice, instead of four times a year, and "had no (good) argument in favor of UNMIK to change its format and for the role of this mission to be transferred to EULEX."

"The Ukrainian ambassador presides over the Security Council. This morning we talked about the similarities between our countries' situations, but he jumped out of it, and spoke about the function of UNMIK as if he were a representative of one of the great countries, in favor of holding fewer sessions, and said that Resolution 1244 does not determine the schedule and the format," Nikolic said.

Nikolic also said those who advocated and defended the views of Serbia did so openly, citing as an example the Russian ambassador who spoke for 20 minutes.

Nikolic reiterated that "Serbia will not recognize Kosovo, regardless of what is offered in return, and no matter what kind of pressure we are exposed to."

He called on all states that have not recognized Kosovo to remain firm in that position regardless of the "shameless pressure."

Maintaining peace and stability is Serbia's primary goal, Serbian President Tomislav Nikolic told the UN Security Council earlier on Monday, urging the international community to influence the provisional institutions in Pristina to establish the Community of Serb Municipalities pursuant to the Brussels Agreement, and noting Serbia would never recognize Kosovo, Tanjug has reported.

According to Beta, he said that Serbia would continue to conduct a peaceful policy and the dialogue with Pristina, and was ready to reach agreements and compromise, but it would not accept blackmail or provide an excuse to anyone to use violence.

Nikolic said that Serbia's effort to maintain the dialogue resulted in agreements being broken and aggressive action by Pristina, aimed at provoking clashes, and he cited as examples the ban on delivering Serbian-language textbooks, the attempt to seize the Trepca mining complex and denying a train from Belgrade entry into Kosovo.

Nikolic described the deployment of special police units to Kosovo's north because of the train from Belgrade going to Kosovska Mitrovica as a call to an armed clash and a direct threat to the lives of civilians.

He also said that transportation interconnections in the 21st century could not be regarded as a provocation of anyone, noting that the initiative for introducing that rail link had come from students of the Serbian-language university in Kosovo and Metohija, and recalled that Pristina responded with "threats, planting mines along the rail tracks and the use of rifles and armoured vehicles."

Addressing the council, Vlora Citaku said that Kosovo "celebrated their 9th anniversary of independence ten days ago" and "persevered through years of discrimination, exclusion, mass killings, rape and deportation."

"Today, Kosovo is a free, independent and sovereign state, recognized by an overwhelming majority of free nations. Serbia’s refusal to accept that reality only kept it hostage to its own neocolonial past," the UNSC website quoted her as saying.

Belgrade and Pristina have been trading accusations of inflammatory rhetoric, which has led to a decline in trust between the two sides, UNMIK Chief Zahir Tanin said on Monday at the UN Security Council.

There is no alternative to the dialogue, he said, adding that both sides should put in place the agreements reached within the EU-facilitated dialogue.