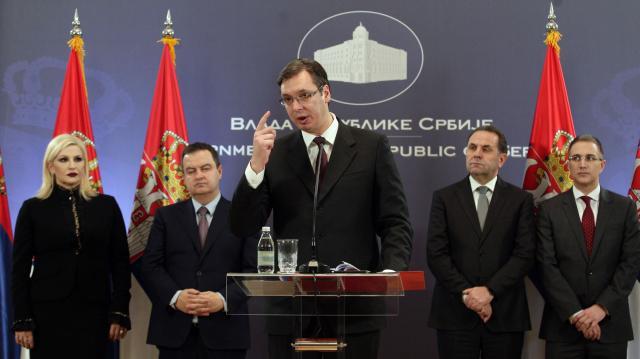 Vucic made this statement when asked to comment on the fact he and Nikolic previously said two different things on this subject, in the same day.

Namely, Nikolic said he had Vucic's support and that he would announce whether he will run again by Christmas (January 7), while Vucic said his ruling SNS party would be deciding on a candidate "in two, three months' time."

Serbia should hold regular presidential elections in the spring.

Vucic also indirectly touched on the possibility that early parliamentary elections might also he called.

He hinted at this several times in the past, but would at the same time say snap elections would only be held "if there is need for them."

Today, Vucic thanked reporters for "putting up" with him during the year, and then added that he "does not know whether they'll have to do that the whole of the next year as well."

"One of the most difficult years for Europe and the world is behind us," Aleksandar Vucic also said on Thursday.

But despite that, Serbia managed to maintain stability and peace, which is also the goal for 2017, he said.

According to Vucic, in addition to this most important task, "more citizens" should feel "economic prosperity" next year.

"The citizens' lives are still hard, but I'm sure that even those who have not yet been able to feel the results of the serious and responsible measures, will certainly feel them in a little while," he said.

For the sake of preserving peace and stability in the country measures have also been taken to "improve the operational capacity of the army and of the police," Vucic said.

The prime minister told reporters he was grateful for their "dedicated work" during the year, and apologized for his "sometimes emotional reactions."