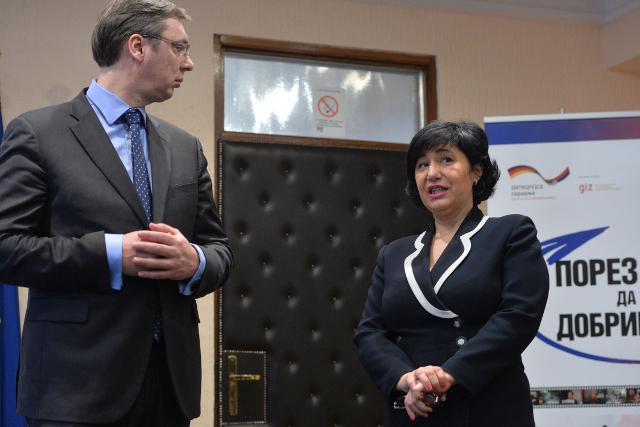 "If you have been wondering how someone on an average salary can drive a good car and have an enormous apartment , you need to know they have that because they have been taking from all of us," Vucic said.

"Our plan is to collect taxes even more assiduously," Vucic said, adding that the Tax Administration was recruiting a significant number of professionals because the percentage of the grey economy was still large and the tax evasion rate was also unacceptably high.

The 2016 tax revenue projection was 711 bln dinars, with 768 bln collected thus far, which is 8 pct more than planned, he said.

Currently the Tax Administration has 567 field inspectors and 104 tax officers, Vucic stated and added that one hundred inspectors more will have been employed by April.

The prime minister noted that the situation is not ideal in any part of Serbia, and as an example he mentioned that tax inspectors controlled a fair with 13 facilities for exhibitions, of which 11 did not have turnover registered through the cash registers.

In this regard, he said, the most difficult situation is in central Serbia, but it is not ideal in Belgrade or Vojvodina either.

Vucic underlined that it is essential that citizens take till receipts, and in this regard commended the educational campaign in schools, as well as sweepstakes of the Tax Administration.

He called on all citizens to participate in the biggest lottery organized by Serbia at which the prizes will be an apartment and cars.

"You do not have to buy a lottery ticket, but only to collect till receipts," Vucic said, adding that the intention is to encourage people to take till receipts and thus show that they care about the quality of roads, medical treatment and education.

He "particularly praised citizen Miodrag Golubovic, who sent New Year greetings to Director of the Tax Administration Dragana Markovic, but instead of a gift he sent her a box with all till receipts he collected in 2016," the government said on its website.