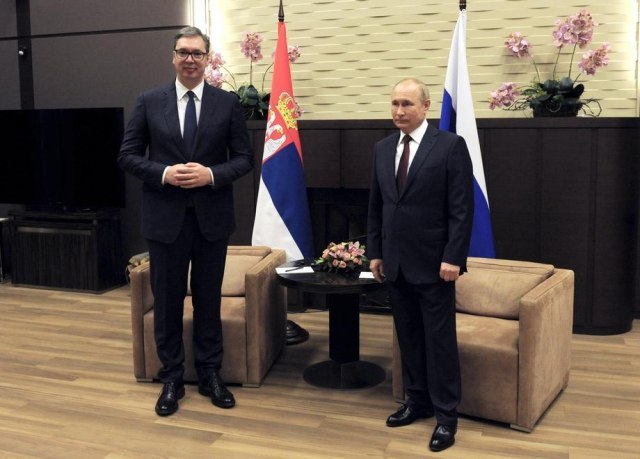 The meeting lasted three hours. Vučić said in front of the members of the delegation that he was very happy with the course of the talks, which probably means that he managed to get good conditions for the gas arrangement.

"We are still expecting you in the Temple of Saint Sava," said the President of Serbia, Aleksandar Vučić, during the meeting with Putin.

President of Serbia also emphasized that the cooperation between the two countries in the military-technical sphere is at the highest level, and that official Belgrade hopes for new agreements.

"Yes, our military-technical cooperation is at the highest level. We are grateful to you for the nice gifts we received. I think we will have new agreements in various spheres," Vucic said.

He said that during the meeting in Sochi, reports TASS.

"We are grateful for the support of the Russian language in Serbian schools," Putin told Vučić. After the meeting, the two presidents continued the conversation over lunch, and Vučić told his delegation that he was overjoyed because of the conversation so far.

Relations between Serbia and Russia are at the highest level in history, Serbian President Aleksandar Vucic said today during a meeting with Russian President Vladimir Putin in Sochi.

"I believe that the relations between Serbia and Russia are at the highest level in history," Vucic said, as reported by the Russian agency TASS.

"Also, we cooperate in the field of defense, we organize joint military exercises... Your armies are being trained at our universities," Putin stated.

"We talked about COVID-19. I am glad that we delivered vaccines to Serbia and that we started the production of 'Sputnik V' in Belgrade. It is important for Serbia and the region that these vaccines can be delivered to other countries. It is a symbol of trust of the two countries", President of Russia pointed out.

Vučić: "We got an incredible price"

We got an incredible price of 270 dollars in the next 6 months, so that our price would not change, we got an increase in the amount of gas for those 6 months. "Bajatović literally jumped for joy because he thought it was impossible to achieve," said Vučić.

"As for our efforts and joint steps on the international scene, even in resolving the Kosovo issue, you know that our position is principled. It is not subject to the current political situation," Putin said during talks with Serbian President Aleksandar Vucic in Sochi. "We support your position on the Kosovo issue," Putin stressed.

President of Russia expressed hope that the situation will eventually develop in a way that suits the interests of all people living in the region.

"We are developing relations between the governments of the two countries. We expect your prime minister to come to Moscow in December," Putin told Vucic, reports TASS.

Earlier, at the beginning of the meeting with Vučić, Putin announced that Moscow and Belgrade would find an acceptable solution for the terms of the new agreement on gas supplies to Serbia.