"There will be no violent coup, and Vucic was right."

Prime Minister Ana Brnabic said last night that these are the most violent protests so far, but that there will be no violent coup in Serbia and no anarchy 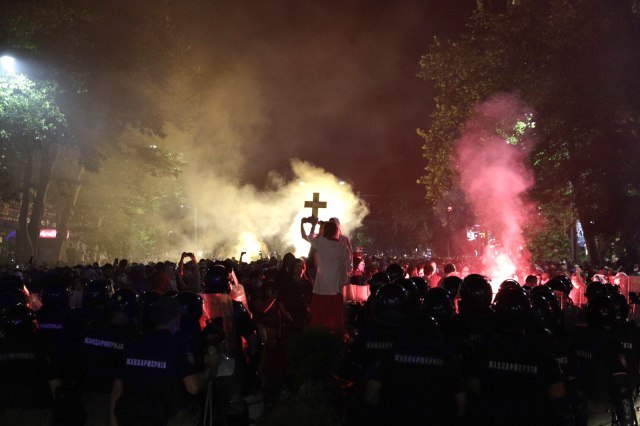 Today, the Crisis Staff will hold a regular session and we will continue to fight against coronavirus and save health workers, and people's health, and we will win, Brnabić said for TV Pink, calling on the citizens to be disciplined.

She pointed out that everything seems to be in place and that curfew has not been introduced yet, but that she must fight for people's health and balance for the sake of preserving the economy. ﻿

Prime Minister said that the democratic order in the country and stability would be preserved, and she told President Aleksandar Vucic to go and fight for Kosovo and Metohija tomorrow.

She assessed that the violent protests in Belgrade undoubtedly caused huge damage to the upcoming talks, but that Vucic will do his best and focus on Kosovo, the security of Serbia and the future of the entire region and compromise.

"There are many who do not like it, but the largest number of citizens are behind it, and that is the strength of Aleksandar Vucic," Brnabic said.

Brnabic said that the state will protect political opponents such as Vuk Jeremic, Sergej Trifunovic, Dragan Djilas..., who were attacked at the protests, but not those who want to beat someone up, because violence will not be allowed.

She also noticed that when you call for violence and a violent change of government, which the SZS and other political leaders have been doing for more than a year, then it happens that bigger thugs and hooligans, right-wing organizations, take to the streets, so Jeremic barely escaped them yesterday, and later Trifunovic.

Brnabic said that the government and the state will be able to preserve the security of all citizens, the constitutional order and to come to terms with this type of aggression.

She assessed that it was the worst kind of far right wing forces, and rejected the criticism coming from Europe about the alleged excessive use of force.

"We have seen a much sharper reaction of the police and a more brutal reaction in many European and other world centers such as Paris, Berlin, London," Brnabic said, adding that our police tried to preserve peace and stability, and reacted only when there was attempts to storm the assembly.

She also says that there is no nice word for those in Serbia and the EU who condemn what the members of the police did and defended the home of all citizens from the intrusion of right-wing hooligans, people who have nothing to do with European values, and that they organized people's patrols against migrants.

"Who is entitled here to defend human rights, I guess the Ministry of Interior should protect the assembly and all citizens from bullies and hooligans," Brnabic pointed out, adding that this is a blow to Serbia and all its citizens, undermining democratic foundations.

She also says that various extremist groups are in question and that it has nothing to do with coronavirus, and that it has been planned for a long time, from the elections until now. That is the culmination of their anger, but that is not the face of Serbia, the Prime Minister assessed".

"The only goal of the protest is to weaken Serbia and our position before Vucic's talks in the coming days," she pointed out, adding that this atmosphere was created with the support of various media, politicians, but also with a foreign factor.

"The elections are behind us and the citizens have said what they think, what the future of Serbia is and who should lead it," she said, adding that attempts to change the will of the citizens will not pass.

She reiterated that this has nothing to do with the measures against COVID-19, because they have not been introduced yet.

Brnabic also believes that Vucic is right because the numbers can be reduced only by introducing curfew, but that the authorities will give another try with applying other measures.

The economy must also work, because it needs money for the fall and for tests, respirators...

She also notes that the growing number of the coronavirus infected occurs everywhere in the world, and that Melbourne introduced quarantine for six weeks.

We will win in spite of everything, the Prime Minister said and pointed out that 10 percent of those are against Vucic and that 90 percent should live and work, and she also told Tanja Fajon and everyone else that there will be no change in the will of the citizens.

"We fought for the citizens and we are fighting now, the police should have worked to preserve the constitutional order, and not as Tanja Fajon and Picula say," Brnabic concluded and asked what European countries would say if someone broke into their assembly and would they talk then about peaceful demonstrations.