My goal is to reinforce Belgrade-Pristina dialogue and secure agreement, Matthew Palmer says for Tanjug 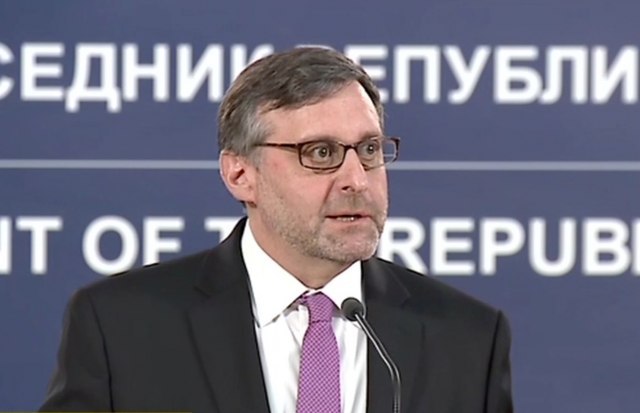 Palmer, in his first interview since the appointment for the US Special Envoy for the Western Balkans, points out that he accepted this post as he is confident that he could contribute to reaching agreement on normalization of relations between Belgrade and Pristina, which would in turn transform Balkan in general, opening up EU path of Serbia and so-called Kosovo, and present "a positive thing for the region, Europe and the United States, respectively".

"The solution for the Kosovo problem is high on my priority agenda. We have the opportunity and want to make use of it", Palmer says, adding that his more precise goal is the resumption of dialogue and securing agreement.

Resumption of dialogue between Belgrade and Pristina, as Palmer underlines, stands for the short-term goal of U.S.

"Elections on Kosovo are called for October 6, while election in Serbia will be held in the spring. There is a possibility of resuming dialogue between the elections, and we should use it. We hope that both sides will use this opportunity", he underlined.

Palmer said that we are in for a series of challenges within this process, one of them being the resumption of negotiations, while the other is finding mutual ground for negotiations.

Palmer said he hoped Belgrade-Pristina dialogue would resume and that Kosovo would revoke the decision on import taxes on goods from Serbia and Bosnia as well as that Serbia would stop campaigning for the withdrawal of Kosovo's independence recognition.

We hope that both sides would recognize their interests, by reaching mutual agreement", Palmer said, openly adding that U.S. would prefer to see mutual recognition as a focal point of the negotiations.

He reiterated that U.S. aims at supporting dialogue and agreement that would allow all sides to protect their interests.

He pointed out that neither side should not feel that it lost something: "This would call for a compromise, a kind of empathy, understanding and readiness for cooperation in finding a solution that would be locally acceptable, in the same time being presented to the citizens as a real solution", Palmer explained.

He said that both Serbia and United States aim at the same goal - progress towards Serbian EU accession.

"We want European perspective for Serbia, which calls for resolving the Kosovo issue. Serbia has US support in this process, as well as Kosovo. We want to support both sides to meet, identify points of mutual interest, but also identifying the differences, reaching agreement that would be best for their respective future", he explained.

When asked what would happen in case there is no agreement, Palmer responded that in that case, all sides will lose.

"We hope that it is possible to reach agreement, while in the process, they can count on the friendship, support and active engagement on the part of United States", Palmer concluded.

When asked whether the interpretations of the part of the public are sustainable that the west speeds up Kosovo resolution until June as it links it with the US elections and Donald Trump's desire to reach solution under his term of office, Palmer said that the desire to reach agreement is not led in accordance with US political agenda, but the fact that the longer the dispute lasts, it will take longer to resolve it and progress towards the solution.

“We hope that both sides will understand the need for acting urgently, resuming the dialogue soon after the Kosovo elections and establishment of a new government", Palmer concluded.