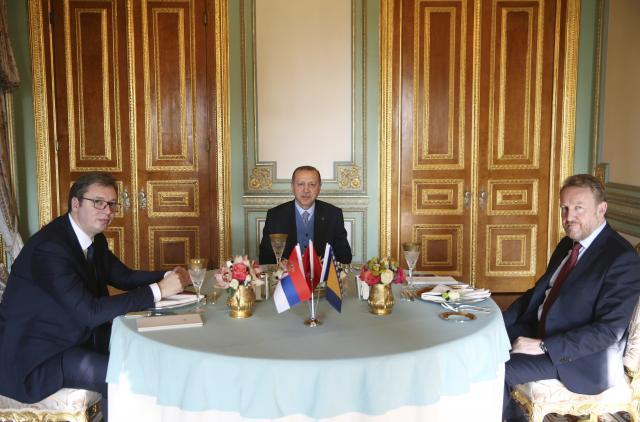 And the only thing Serbia demands from Bosniaks (Bosnian Muslims) is that Serbs in the RS (Serb Republic, Serb entity in BiH) and everywhere else in BiH feel safe, the Serbian president said in Istanbul on Monday.

Vucic said this after his tripartite meeting with Turkish President Recep Tayyip Erdogan and Bosniak member of the BiH Presidency Bakir Izetbegovic, and added:

"As we do not want to undermine your territorial integrity, we plead that you have the same attitude toward the Serb Republic, which is an entity has created through the Dayton Agreement in the territory of BiH."

"I think these things are clear, and I believe that any conversation is healing," said Vucic.

He also told reporters that the conversation with Izetbegovic was "good and open - primarily concerning overall relations between Serbs and Bosniaks, as well as relations in BiH, and between Serbia and BiH."

"What is most important for people is that I am convinced we will succeed in joint efforts to ensure lasting and secure peace both for the people of Serbia, but also for Bosniaks and Croats and for all those who live on the territory of BiH", underlined Vucic .

"Our agreement is that whatever happens and however it happens - peace and stability must be preserved", stressed Vucic, adding that this was "very important, because everything you achieve can be achieved only if you have peace and security."

When reporters remarked that Croatian President Kolinda Grabar-Kitarovic was also recently in Istanbul, and when they asked "whether Turkey can relax relations in the region" - Vucic once again expressed his gratitude to Erdogan for the messages he delivered in Novi Pazar (a town in southwestern Serbia), which he said were "every different than the messages that existed seven and eight years before."

Vucic also said he was "always ready to respond to every invitation to talk, it is extremely important to talk" - and that he saw "no problem in the fact that some people have their own interests in the Balkans, without this being us, Croatia, and BiH."

"We know what's ours, everyone knows everything, and that's always welcome," Vucic has been quoted as saying.

Asked to comment on RS President Milorad Dodik's statement describing as precedent the meeting with only one member of the BiH Presidency, Vucic said that Dodik criticized "their behavior" and added, "I will not go into that at all."

Vucic said it was up to him to talk "always and almost with everyone," and pointed out that Izetbegovic did not represent himself in Istanbul as the president of the BiH Presidency, but as a Bosniak member of this body.

"I understand President Dodik, but I think it's good when people talk," concluded Vucic.