Vucic arrived to Banja Luka, he was welcomed by Cvijanovic and Dodik VIDEO

Serbian President Aleksandar Vucic arrived on a one-day visit to Banja Luka, to hand over almost 2.7 million euros in aid to the Republic of Srpska institutions 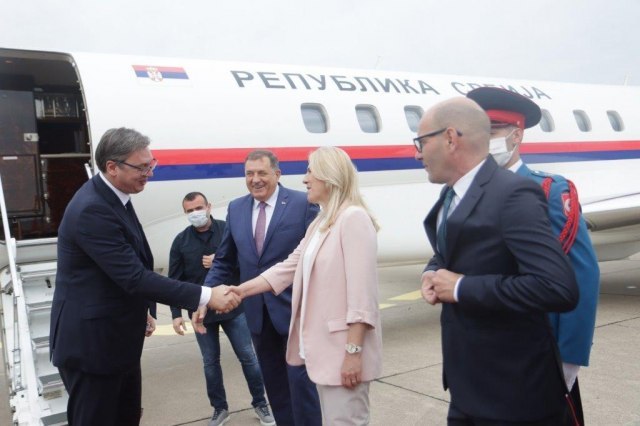 Vucic was welcomed at the airport by the President of the Republic of Srpska, Zeljka Cvijanovic, and the Serbian member of the Presidency of Bosnia-Herzegovina, Milorad Dodik.

Vucic will first visit the University Clinical Center at 10 am and hand over a donation from the Republic of Serbia - 15 ambulances, worth almost 750.000 euros, and then he will visit the works on the construction of a multipurpose facility in Petricevac, which is planned to house a kindergarten, health center and local community, the construction of which is financed by the funds of the Republic of Serbia.

A meeting between Vucic and Dodik and Cvijanovic is scheduled for 11.15 am in the Government of the Republika Srpska, followed by a meeting and statements for the media.

The President of Serbia will end his visit to Banja Luka with a tour of the works on the construction of the Serbian-Russian temple.

Serbia is also helping the RS "Nikola Tesla" Student Center in Banja Luka with one million euros for the reconstruction of one pavilion.

Also, for several smaller municipalities in RS, Serbia will allocate 540.000 euros for kindergartens, schools, health centers, and 400.000 euros for the Spiritual Center in Petrovac.